Scorpios are a water sign. Their ruling planet is Pluto, which makes them appear to be mysterious.

They are intense, loving, and very into the romantic game. But their grand, mythic view of love can sometimes veer into obsessiveness.

They are very charismatic to others and jump at the chance to get intensely involved in a meaningful relationship. future partners should be prepared for quite a ride. So who is Scorpio compatible with? What makes a good match?

If you’re looking to get into a relationship with them, bring out the classics – sunsets, romantic music, classic movies – pull out all the stops.

Be expressive and full of passion – that’s what attracts this person in the first place. Don’t be afraid to play the age-old games of love – teasing, suggestiveness, and eye contact – and be ready to dive into the deep end when the time is right. Loving them requires sharing their fascination with romance.

You are a Scorpio, They are…

Who Is Scorpio Compatible With?

These two together can become quite a stable couple. The fact that when you blend these two signs they will find themselves in a situation where they are very different, but at the same time they’re also very similar in a lot of ways. This is one of the most ideal couples for his sign.

These two have a lot of differences from each other, but even that can help them form a beautiful couple. They both like a relationship that is both tranquil and very calm. This can work out for sure. There is a strong bond in the making here.

These two together can form what is a very balanced relationship. When the foundation is laid they find themselves in a very comfortable relationship that is full of love and romance. Both of them have a good level of compatibility with each other.

Who Are They Not Compatible With?

This is not another coupling that considerably has very little compatibility. Pretty much in both in regards to their astrological signs, and their personality traits. That doesn’t mean that this relationship can’t work, it just means that they have to put in a lot of work to be able to make their relationship what they want it to be.

Together they don’t have very much of a chance when it comes to an actual romantic relationship. So when it comes to love there’s very little compatibility at all. One thing that they can completely agree on though is their love of sex. If they’re looking for a short-term relationship that is full of hot moments this would be the one that they would go for. They both understand sex pretty well.

Scorpio’s secretiveness leaves Libra guessing too often to make a connection. This can cause a lot of issues which is why it either works or it doesn’t. Up to both individuals if it’s worth making things work.

The problem that these two faces are that they both look at life in different ways. That’s not to say that there’s no possibility of a love relationship between these two, it’s just that they’ll have to work through a lot of different situations to be able to get there. A lot of people consider this to be a low compatibility match-up, but with a little bit of help and a little bit of work, they can make it happen. 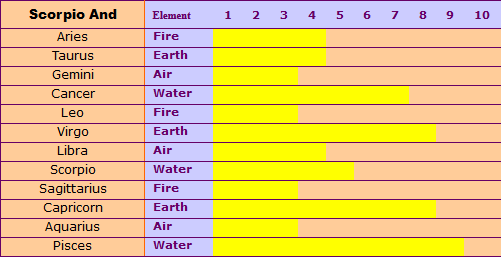 Virgos are ideal for friendships that last a lifetime. They are honest, quiet, and social by nature. All of these qualities would be admired by someone born under the sign of Scorpio. As both have many common traits, there are a lot similarities between them. This would be considered beneficial in the long run for any friendship. Therefore, they make an excellent pair.

Capricorn is another sign that makes a good friend. This is even though they have a very discreet personality. They may become their best friend of them. This sign is appreciated by most people because they are very considerate of others and the way they live is highly appealing.

They have good friend matchups with: Virgo, Capricorn, Cancer, and Pisces.

Scorpio Cancer’s love is almost immediate as these two signs are instantly attracted to each other. The biggest issue these two signs face is their emotional vulnerability. Once they learn to trust each other they will form a very strong and satisfying relationship. Aries can be a bit of a challenge for the less aggressive Scorpio love. This relationship can become an emotional contest full of manipulation unless true emotions are expressed early on in the relationship. Taurus, on the other hand, works very well with Scorpio. They are both protective of the other and neither likes to make changes quickly. In addition, in an argument, they are on equal footing so neither dominates the other. In bed, sexual Scorpio helps Taurus explore all aspects of lovemaking while Taurus challenges Scorpio with a hearty sexual appetite.

Who Is Scorpio Sexually Compatible With?

The astrology sex profile shows that Capricorn can be an equal match for Scorpio in the bedroom. Each has the creativity and passion to put on quite a show. Their love-making sessions can only be categorized as triple X and would outdo any steamy pornographic movie at the local sex shop. While Scorpio and Pisces’ love is not as steamy as Capricorn and Scorpio, theirs is more a meeting of the minds and heart. Nothing can beat the emotional connection these two signs make in the bedroom. Aquarius works very well with Scorpion both in an out of the bedroom. They are both goal-oriented and neither will back down in an argument. In bed this intensity rises to the surface with some fierce and passionate lovemaking. The Scorpio Sagittarius relationship will require a lot of work before the two can feel any deep emotions for each other. However, in bed the competition is on to see who is the physically stronger and this can make for some marathon sex sessions!

How to Love match up with a Scorpio

For a Scorpio female, she requires the attention she thinks she deserves. She can be materialistic at times and act as if she is a spoiled princess if she does not get her way. Thus, because of what she wants and the way she wants it, she can literally appear as cold as ice. The way to “melt the ice” is to be exciting, interesting, challenging, and be able say things that make her think and ponder.

For the Scorpion male, he has a tendency to act like a peacock by flaunting his feathers and acting as if the world should bow down to him. He prides himself on not only being successful, but also on being right. He thinks and works on his primal instincts more than his logic. Thus, because he is so primal, he’s an animal in the bedroom. In order to make sure he’s a keeper, it’s best just to listen to what he says and let him have his say without interrupting unless he wants you to participate in his plans.

The signs that are most compatible with a Scorpio include a Virgo, Cancer, Capricorn, and Pisces.

Neutrally they get along with Libra, Sagittarius, Aries, and Gemini.

Negatively they will spar with Aquarius, Leo, and Taurus.

If paired with another Scorpio, they can be extremely attracted and passionate to each other, or repelled like oil and water.