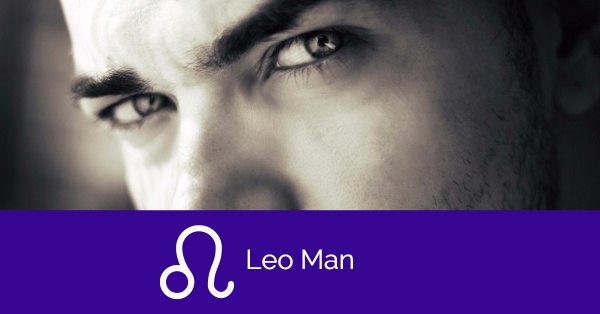 These guys often like their women to look good and not say too much. Pooey on that! But maybe that Leo guy you know (or that Leo guy that you are?!) isn’t that kind.

Leo’s like the outside, especially when it is sunny — it puts ’em in a good mood. Leo’s are extroverts and not in that phony way either, a genuine generous, outgoing, love-to-laugh kinda fella.

Romance is a way of life with this guy: he’s always either falling in love or falling out of love, but you can bet he’s always falling. His Achilles heel is most certainly his vanity.

He can sulk big-time and can be very jealous. Very jealous. To the point of rage. And then he’s charming again. So beware. Gosh, I was kinda mean to my friendly Leo male and female, I apologize, but. . .

Those who pay close attention to Leo men specifically see him as someone who likes to be in the spotlight all the time. Someone who desires attention, especially from those he is attracted to romantically.

Truth be told, one of his best qualities is his loyalty. There will be no tolerance for lies, deceit, cheating, or any other kind of false promise.

He is highly respected, trustworthy, very faithful, and devoted when he makes a promise to someone. Whatever he promises, or whatever the cost to him, he will still follow through.

Sometimes the problem with this is that they expect the same thing in return from the people they are dealing with.

The Leo man is not without faults, however. They can be quite self-centered or selfish, and this can be common for most men born under this sign.

It means that he has a great deal of love for himself, and is usually in need of others’ attention and approval.

He loves to receive compliments and prefers to be the center of attention no matter what situation he finds himself in.

Having a highly energetic and impulsive personality, he is always on the move no matter what, seeking out new adventures and experiencing new experiences at every turn.

If he feels like his life is becoming monotonous or boring, he will always find a way to make things more interesting for him or to change things in his life.

Those who prefer a more relaxed lifestyle where the dynamic doesn’t change too often but still want to live with him might find this frightening.

The most important thing to know about a Leo man is that he is extremely self-assured and proud. He rarely apologizes or admits to making a mistake.

He usually gets his back up and insists he is right about whatever he does or says when confronted. It may be possible to soften up his personality if you become very important to him.

However, anyone who confronts him or attempts to hit him head-on will come face-to-face with his pride. 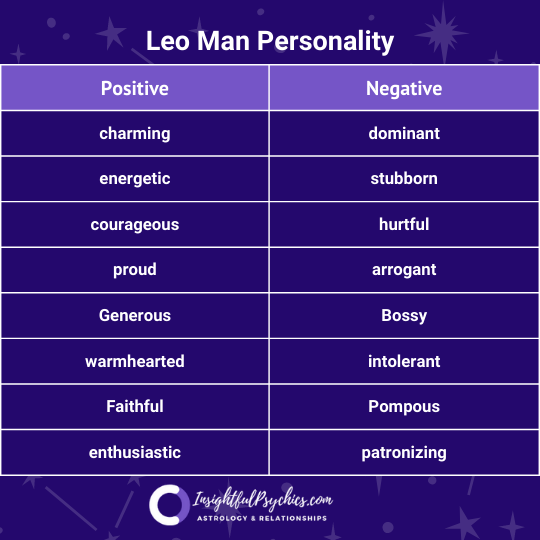 He’s powerful, he’s intense, and he’s Passion personified. That’s exactly how he is when he’s in love with somebody.

He needs to remain in a relationship that always stays hot. He does everything in his power to stay away from relationships that don’t bring the heat.

When he falls in love with someone, it takes a lot to pull him away from that person. He would spend every waking moment with his lover if he had his way.

They enjoy spending time with those they’re interested in or in love with, and they take great pleasure in making their partner feel special.

They make great partners because they know how to treat their loved ones well and always put their needs first.

Even though they have a very fiery nature and a sexual side that is hard to match. These guys do have the ability to be adorable.

They love showing affection, whether it’s in the privacy of their own home or snuggling with their loved ones.

Or even walking down the beach hand-in-hand as they show their partner off to the world.

It all comes back to passion! It’s what he craves, it’s what drives him to be happy in a loving relationship.

His goal is to keep things exciting, no matter how long they’ve been together. It’s almost as if he does everything to impress his lover with his affectionate, loving side.

That might be one of the best things ever! When a man feels that passion inside his heart, he doesn’t let that flame go out. It’s almost like the Terminator of love! he will always be back!

This guy is the meaning of devotion. When he’s dealing with someone, he’s 100% devoted to his partner! To the point that he gives his girlfriend the best of him.

These guys are very protective of those they love. It’s a piece of cake for them to show lots of love and affection. They do whatever they can to be as sweet as possible.

They love to use their imaginations and creativity to surprise their partners with every bit of passion and romance in their hearts. They’re always looking for new ways to amaze their girlfriends.

They need to feel as though they are appreciated and very respected. It’s important to them that you love them, and you are grateful for their contribution to your life. They need to be able to see that physically.

They need these things to keep worry and fear at bay. They won’t feel any negative feelings if they feel appreciated by their girlfriend just as much as they value her.

However, you might never know that they have these concerns and fears. Because they do their best to keep this secret because they don’t want to reveal that they’re slipping.

Leo men make great boyfriends because they are passionate, energetic and always up for a good time. They know how to have fun and are always looking for new adventures.

They are also very romantic, often spoiling their partners with flowers, chocolates and thoughtful gifts.

If you’re looking for a man who will sweep you off your feet and make you feel loved and cherished, then this man is definitely the right choice!

How To Get A Leo Man’s Attention

How to Attract a Leo Man

How to Attract a Leo Man. He is the most opinionated of the zodiac signs. The Leo man is very hard to communicate with, so to attract him you will need to keep the conversation light and refreshing without being condescending.

Even in his opinionated attitude, the Leo male needs plenty of love and reassurance.

Give Leo plenty of love and support and he will be yours forever. Part of attracting a Leo is to make him the center of your life because he will feel insecure that you are not completely his which will scare him away.

Leo males are not stubborn like a Taurus man, but their opinions mean a lot to them and he does not like to be criticized.

Criticizing him will also make him feel less self-confident and unsure of your loyalty. Make sure you attract a Leo by assuring him of your love and showing him that he’s the center of your life.

For some people, it can be an exhausting chore, but you can build a relationship with a Leo man by offering to take him on trips where the two of you will have plenty of time alone to appreciate each other.

On your quest on how to attract a Leo man you also need to show your Leo man plenty of affection. The Leo man loves public displays of affection.

Hold his hand, give him a kiss and hug, or simply snuggle with him openly. This will give your Leo more self-assurance that you are always there for him.

Showing your Leo man plenty of affection will make him feel more comfortable with you and he will be more likely to stay faithful to you.

Always keep the spotlight and focus on your Leo man, and he will fall for you completely for a long-lasting relationship.

this is a guy that loves attention, so go out of your way to give that to him. One way to get him to notice you is to start throwing compliments at him.

This is something that he absolutely loves to hear, and it will open up his heart and mind to the idea of being with you.

Don’t be too shy towards this gentleman, as he likes a person that has some character behind her. A woman that is very much aware of her own personal strengths.

If this guy is interested in you, then It won’t be too long until you know that for a fact. His interest will drive him to ask you out on a date.

Now being Leo the Lion, this guy is all man. He likes to play that part to a T.

The best thing you can do in this situation is let him be the one that plans the date out from beginning to end.

He enjoys going places where you both can stand out in the crowd. He likes the idea of being able to show you off a little bit.

As to his personality in this situation, it can go two different ways.

He could be the type of guy that is conservative and prefers to come across as more dignified, or he could be more of a flamboyant type and he will dress according to that style as well.

If he’s flamboyant it might come out more so in the way he entertains you than his style. He’s a guy that loves to impress.

He likes his date to dress elegantly.

Sexually speaking this is a guy that indeed loves pleasure.

If you get his mind going you will definitely find yourself being invited back to his Lion’s Den for an evening of passion and fun. This guy does have quite an insatiable appetite for sex.

If that is not your goal on the first date ( which there is nothing wrong with) you may want to slow it down a little bit and let him try and impress you more.

his zones are the Spine and the back. Mixing some light scratching, and slowly run your fingers up and down his spine.

Sex With A Leo Man

Leos are all lights, cameras, and action and in the boudoir, they are creative showmen. Everywhere is a stage for Leo and he will love it if you play your role with gusto.

Don’t be shy with a Leo who loves the attention and plenty of compliments, please. Always remember that Leos have star power.

But they care a great deal about their supporting lady’s pleasure so don’t hold back or fear dressing the part and giving your best performance.

Turn Ons: Flattery. Your big ego is always hungry for fresh meat, so if a woman praises, pampers, supports, and idolizes you, you fall for it. If she’s a knockout, you’re even more delighted to have her by your side. As long as this gem doesn’t stray or argue with you, she’s as good as gold.

Turn Offs: Competition. You hate being overshadowed, so a woman who’s a bit too independent and successful is a very bad match. Likewise, if a mate calls you on your domineering ways, it will surely provoke your roaring temper.