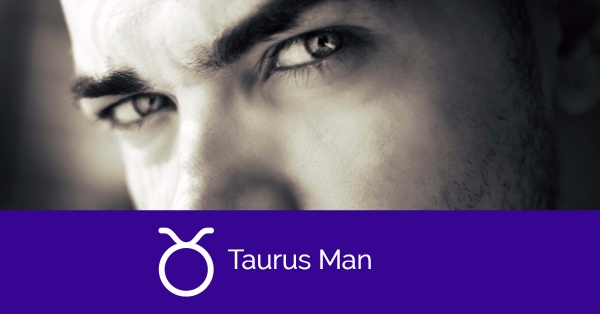 I will not deceive you, he ain’t anyone’s idea of a tempestuous lover-boy. Patient but forceful is more like it. He is the most stubborn of all signs in the zodiac. he just doesn’t give in.

These guys are earthy and they can be sensual if the right man or woman unleashes their uptightness. Food and drink are at the top of his list of pleasures.

He is confident. He doesn’t spend money too easily, he’s kinda saving it for a rainy day, but that day never comes, he just keeps packing it away, hoarding it, even.

He is one of those boys that when he gets sick — whines! And wants you to wait on him hand and foot. But this guy can be real emotional too and that is a spectacular quality.

The Taurus man is usually more laid-back than most men, and he’s pretty patient. That means they don’t get stressed out over the little things. It’s a rare sight to see one of these men blow up, go off, or act overly aggressive.

There’s a sense that these men are pretty traditional and don’t go out looking for excitement or action. He’s known for living his life routinely, which includes surrounding himself with people he can trust and being in relationships with them. Relationships are their thing and single life isn’t their cup of tea. Peace and stability are what this guy wants in life.

He’s a very stubborn guy, no doubt. They don’t take a break until they reach their goal and get what they want, no matter what they’re working towards. It doesn’t matter what it is, whether it’s a job offer they’ve always wanted or the relationship of their dreams.

These individuals are deeply attached to their material possessions because they want stability, tranquility, and more importantly security. They desire to be comfortable in all aspects of their lives. His structured approach to life gives him the ability to figure out what exactly he wants to achieve, design a strategy to do that, and then work towards making it happen.

He has a traditional and conservative view of love. This man takes the classic approach to relationships.

Here is a man who is passionate and highly affectionate. He injects romance into the partnership and makes his partner feel truly special.

Their goal is to be in a relationship with someone who will provide them with the security, stability, and comfort they desire. They need to feel that they are with someone who truly cares about them. They expect to get back exactly what they put into it. What they do, however, is make sure that their partner is happy as they can be. Their ultimate goal is to ensure that the relationship lasts as long as possible. If not for it to last forever!

When they’re in love with someone, they’re very supportive. They’re also very considerate of their partner’s feelings. They’re not just generous with their material possessions but also with giving themselves to their loved ones. They are so caring and compassionate that they make sure that they’re willing to give up some of their free time to help other people when they’re in need.

They will go the extra mile for their partner if they need anything. That’s the type of partner you would hope for!

On the other hand, they’re known for being jealous and possessive. When these feelings arise, they often try not to let it get to them. If they think that the other person isn’t being faithful to them or that they ought to be suspicious of them, they may become upset. This can manifest itself emotionally.

A Taurus guy as a boyfriend is very loving and caring. He will show a lot of affection to the person he likes. A faithful companion, he will show a lot of devotion to his partner. Along the way, he will prove he is trustworthy. To make his partner happy and beaming, he’ll do whatever he can. Naturally, he expects the same treatment in return to keep him happy.

He is an incredibly romantic individual. He is known to be both charming and passionate. He still prefers a more grounded lifestyle even though that is the case. This is also true when it comes to relationships. He must remain grounded, whether in love or in life. It’s his way of feeling safe.

When he’s serious about a relationship, this is where jealousy can start to bubble to the surface. At this moment, you would have to tell him that yes, we are in a relationship, yes, I’m into you, but you have nothing to fear with anyone else. You will be better off in the future if you talk about your jealousy early on in your relationship.

There’s a reason he is one of the most popular zodiac signs when it comes to boyfriends. These guys are reliable, supportive, and down-to-earth. They’re always there for their loved ones, whether it’s through thick and thin or just a simple disagreement.

On top of that, they have a great sense of humor and know how to make their partners feel special. If you’re looking for someone who will be by your side no matter what, consider this man!

How To Get A Taurus Man’s Attention

What To Focus On:

How to Attract a Taurus Man 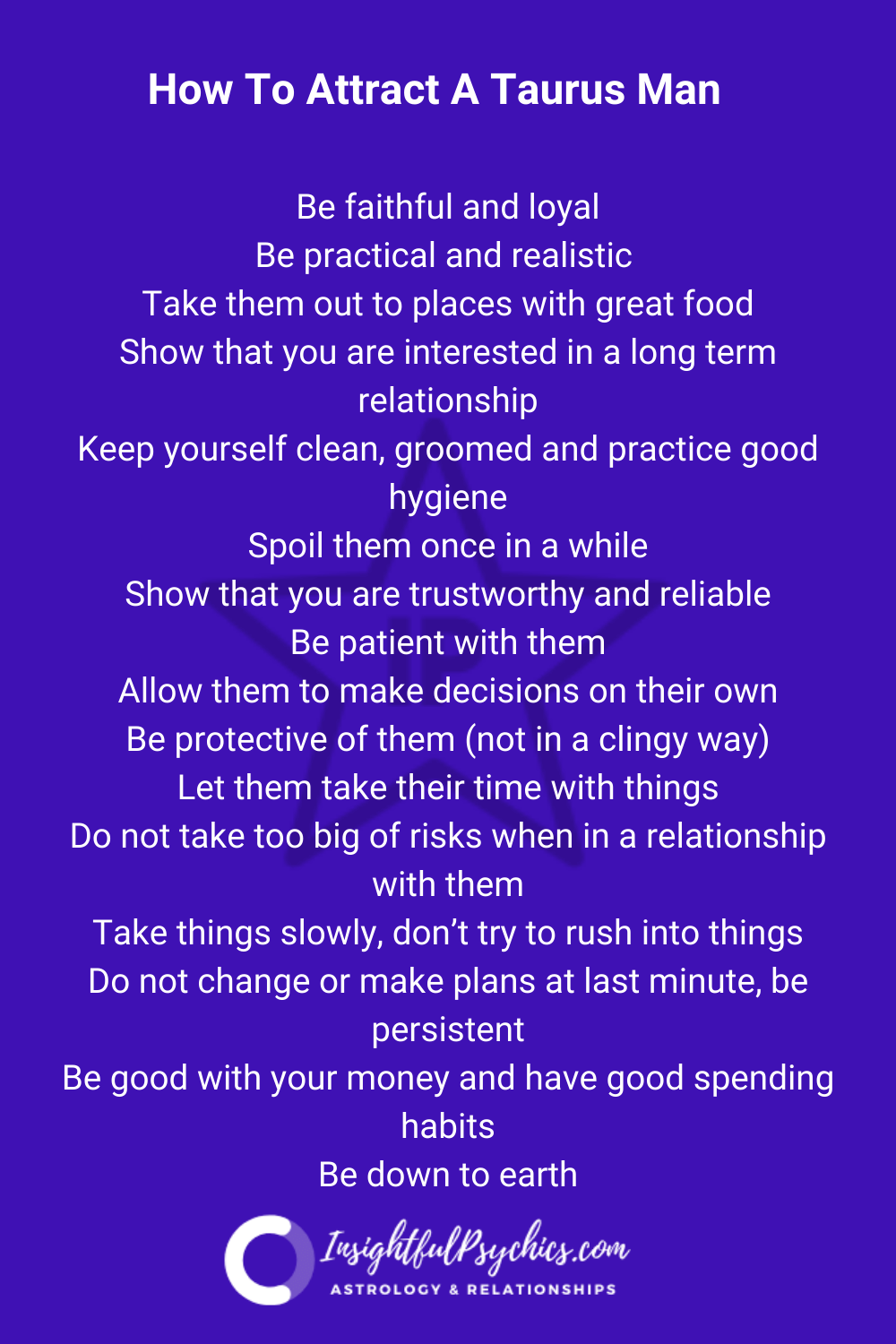 How to Attract a Taurus Man. As many people know, the Taurus is the zodiac symbol of the bull. Consequently, the Tauran man is very stubborn and steadfast in his ideas and goals. Even though he is very self-assured, it’s important to be reassuring to his ego.

To attract him, make sure to have a comforting tone and a motivational spirit. The bulls are also very interested in the beauty and scent of a woman. He will want to choose a partner who makes her makeup, perfume, and outward appearance perfect whenever leaving the home.

He is not a dreamer like some of the other zodiac signs. He is very down-to-earth and is focused on realistic goals. They are determined to keep sight of their goals through constant motivation. To attract him you can surprise him with down-to-earth activities like a simple, home-cooked meal with plenty of fun and indoor pleasure.

He will appreciate your frugal attitude and your ability to create a nice evening at home eating popcorn and watching a movie while snuggling on the couch. This individual enjoys simple pleasures that are affordable and without a lot of hassle.

To keep your man interested, make sure to always provide a simple lifestyle that compliments his attitudes towards life and doesn’t harm his ego. He will look to you for assurance when he has a bad day. His motivation and spirit will never falter, but the man appreciates a woman by his side who will always let him know that he is doing well.

He is also very egotistical, so allow him to stay in charge while he is around. How to attract this man? attract him through wit and charm, and he’ll never leave your side

if you’re looking for an old-fashioned type of guy this is the one to look for. That doesn’t mean his thoughts or views about women and dating are from the golden era. He’s just the type of guy that wants to do the asking out. So if you ask him out first he might be taken back by that.

One of the best things you can do is show your interest in him. Become flirtatious with him, and make your intentions known without verbally coming across as aggressive. Use the eyes! This is definitely a guy that doesn’t react to well too aggressive movements.

Let him initiate asking you out on a date. It might take him a little bit of time to get the hint that you’re interested, but the end result will be the same.

this is a man that loves home-cooked food. So if you were planning a date with him something like that would work over going out to a restaurant if you were the one to initiate the idea of what to do. He enjoys more of a one-on-one company situation when it comes to a first date than being around many people in a restaurant.

He will also be blown away by your warm company and the ambiance of the situation. Add some candles to the mix, and just mention to him it makes a nice little touch.

If you take the time to show him that special effort, it will open his eyes up to you more so and he will appreciate the effort that you put into it. If you can give him the type of night that involves any of those aspects you’re off to a good start.

Sexually speaking this isn’t the type of man that likes to be teased. It is very easy to get him aroused for a sexual experience, and with that said he’s a very sexual person. So once you get the engine started it’s not going to stop. So if sex is not on the menu for the first night make sure you vocalize that to him.

this is a gentleman that loves kissing. Kiss all over his neck and his throat. Don’t give him that aggressive lip service, hit him with the slow and sensual making-out session

Sex With A Taurus Man

He is so romantic and a dream in the bedroom. He loves the preparation as much as the passion so light the candles and turn on the music. This earth sign is no prude but leave the whips and chains in the closet. Slow it down and keep it simple. The sensual pleasure with him will never be boring but too much change in the sack will only confuse him. A tad insecure; it’s best to show rather than tell.

Turn Ons: You want a genuine article. She’s got to be built to last — and monogamous — to meet your standards. You love a woman who’s outdoorsy, artistic, affectionate, and a good cook, since feeding and pampering you are the best ways to win you over.

Turn Offs: Flirts. While you love sensual women, you’re way too cautious to take a chance on a lover who’s not serious about you and only you. Pushy women force you to lose your temper.