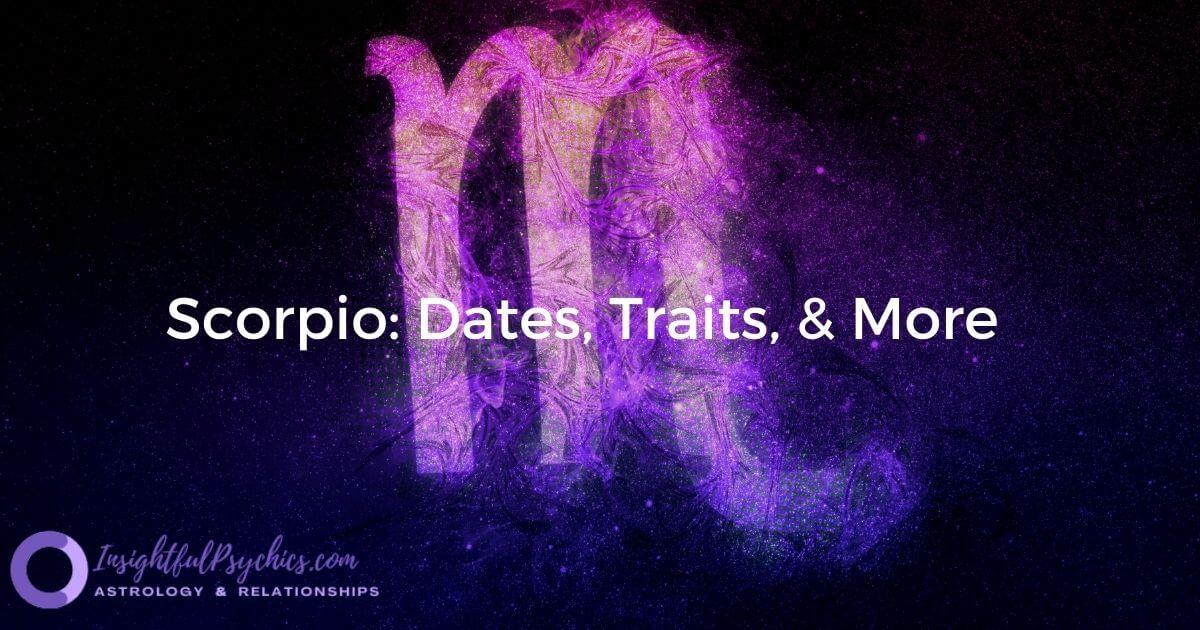 Depending on your own individual chart, these people can be the most difficult to truly get along with, for Scorpios possess a mixture of traits that make them extremely complex beings.

And because Scorpio is ruled by the most malevolent of the planets – Pluto – it shares some of the darker sides of life.

Perhaps this is why some astrologers describe Scorpio as being the most powerful of all the signs, for Pluto is all about power.

Other Pluto/Scorpio traits include secrecy, jealousy and possessiveness, sex and passion, being unforgiving, and obsession.

All this probably paints a rather gloomy picture of Scorpios, which is certainly not the case in general, it is just that many of these darker issues can lie lurking beneath the surface of an otherwise friendly, outgoing Scorpio – the sting in the tail.

The power side to all this may simply show itself in a fixed stubbornness that will not budge to adapt in situations.

On the other hand, many Scorpios use the inherent power capabilities to get to the top in their respective fields.

Where they can fall down however is, being a water sign, emotions often rule rather than logic. They can employ great charm but also can be hard and demanding when it suits them.

The subject they are most famous for is passion.

I must say, that although this aspect is inherent in their makeup, it does depend on their Mars and Venus placements to a large extent as to how passionate they will be, and whether they live up to this astrological myth.

They are very curious and have an innate talent for getting to the bottom of things.

Since it is one of the Scorpio traits to dislike being told what to do, many seek out employment options that allow them to either be the ones in charge or work completely independently.

Self-employment is something that suits the Scorpio temperament perfectly and many of these people will at least try their hand at working for themselves one day.

Scorpio natives are naturally hard workers who are good at investigation, problem-solving, and research.

They are also good with money (another area influenced by Pluto) and quite practical overall. This is a sign that sees many people rise to success under its influence.

Suspicious and Prone to Grudges

A fixed sign that isn’t open to changes of heart, Scorpio is a brooding sort of creature that takes everything seriously.

They don’t easily get over slights and they are very wary and suspicious when it comes to romantic partners, as their feelings run deep and are easily hurt.

It is one of the Scopio traits to be very slow to forgive and even slower to forget.

A Scorpio wronged can be a dangerous creature indeed, as this is a sign that can lean toward vengefulness in the extreme.

These are people who possess strong ideals when it comes to right and wrong and they won’t tolerate a lack of these same ideals in those with whom they keep company.

One of the definitive Scorpio traits is that it will not do anything halfway. These are all or nothing people who don’t ever have lukewarm feelings or reactions to anything.

Obsessions and compulsions are common issues among people born under this influence and some have a tendency toward hypochondria as well.

However, outwardly they who would rather die than show any signs of weakness.

They are mindful of their public images and prefer to be the ones in control at all times.

For this reason, many Scorpio natives find it difficult to submit to authority figures or be subservient to others, even when and where it is necessary.

As both Scorpio and its ruler Pluto have strong connections with the concepts of death, rebirth, and transformation, it is second nature for those born under this sign to face adversity head on and welcome change into their lives with open arms.

This is quite fortunate for them, as it is a Scorpio trait to attract drama and challenge into its sphere of influence.

Your typical Scorpio often has many an interesting story to tell because of this tendency and will most likely undergo several major transitions over the course of a single lifetime.

The intuition Scorpio natives possess is keener and more accurate than that associated with any other sign.

These are folks who are good at solving puzzles and piecing together mysteries.

They also possess a natural ability to look below the surface, ascertain the true motivations of individuals, and see the truth of even complicated situations.

This gives them a considerable advantage over other people and depending on the nature of a given Scorpio personality, the associated person may use what they know for the great benefit of others… or to take advantage of situations to the detriment of those around them.

As much as Scorpio likes to know what others are thinking or feeling, they are very private when it comes to their own emotions and motives.

Scorpio friends often describe them as being tough nuts to crack, enigmas, or people who personify the phrase “still waters run deep”.

Scorpio is the eighth sign of the zodiac and is symbolized by the Scorpion. Scorpios symbol or glyph represents the scorpion’s sting or the stylized motion of this sign’s characteristically intense and profound penetration into depth. The Sun is in Scorpio from around 23 October until around 22 November each year. Scorpio is classified as being of the negative polarity (passive and receptive), of the water element (emotional, sensitive, and intuitive), and of the fixed quality (intense, steadfast, and resistant to change).

Scorpio has a secretive and introspective yet intense, penetrating and passionate attitude, with an urge to unearth, disclose, remove outer masks, identify with the source and transform what it finds.

The characteristic Scorpio type has an intensity of expression, thinking and feeling that springs from an inner depth.

Scorpio is extremely purposeful and has tremendous strength of will and passionate and penetrating power of conviction.

Though not always evident yet it is there, subtly concealed like the scorpion or the snake, a potent power restrained until ready to strike. In Scorpio, there is a power-house of deep energy that needs to be harnessed constructively.

Pluto rules Scorpio and represents this primal life force, which can be sublimated in mystical union.

This is why Scorpio is sometimes represented by an eagle, symbolizing the rising above the lower expressions of this vital life energy.

Scorpio can be identified with manifestations of this fundamental life force on different levels; in the intense and one-pointed spiritual fervor of the mystic, the self-control of the surgeon, the dangerous brutality of the underworld, or the intense, passionate and consummating joy of sexual union.

Scorpio can be too secretive, suspicious, brooding, jealous, and resentful, and may allow its deep energy to be expressed in non-constructive, vindictive, and even cruel and destructive ways.

Physically Scorpio rules the reproductive organs, the genitals, bladder, urethra, and rectum. Scorpio is especially associated with, or “ruled” by, the planet Pluto.

Good Side of Scorpio

They have an easy time adapting, coping, and dealing with any changes in their lives. It is almost like they are always willing to go with the flow.

They are very secretive, which makes it easier for them to keep information private. So if you have a secret you want to tell them, it’s safe.

It is part of their nature to hide their true emotions and feelings from other people. Due to this, they appear to be kinder than they actually are.

They are usually very rational and level-headed. They don’t get distracted easily by outrageous ideas.

They could influence and attract people to their way of thinking. If given the opportunity, they will do whatever it takes to win people over.

However, when it comes to their conversations, sometimes they can stray from the topic and go in another direction, but do so without losing sight of the main point.

The ability to multitask comes naturally to them.

It is possible for them to feel and experience the emotions of others under certain circumstances.

Bad Side of Scorpio

There are times when they can be easily tricked. Sometimes they are quick to take the bait.

They act or show ruthlessness, malice, and viciousness when they hate somebody. It’s not uncommon for them to use underhanded tactics and be sneaky.

It’s possible for them to intentionally hurt their loved ones or friends.

They can appear rude and disrespectful. Sometimes they’re impulsive and don’t think before acting.

Unfortunately, sometimes they tend to be possessive, vindictive, and jealous.

They are driven, intense, and accomplished people in terms of their careers and work-life. They seem to be able to shut out everything, all distractions, and interruptions. When they do not have those distractions, they can concentrate on their work with laser-like precision. Often curious by nature, they are often fascinated and drawn to mysteries. You would certainly not want to be in a position where you would be interrogated or questioned by these people. That’s because they are not only imposing and downright intimidating, but they are also intuitive people who can get straight to the point.

The best jobs for them are as follows

Given their inquisitive nature, being a detective is an obvious career choice for them. Their ability to shut out distractions and interruptions would make them excellent lawyers since they can focus on the matter at hand. They would be outstanding educators and teachers, too. They would make good scientists, doctors, and surgeons because of their curiosity.