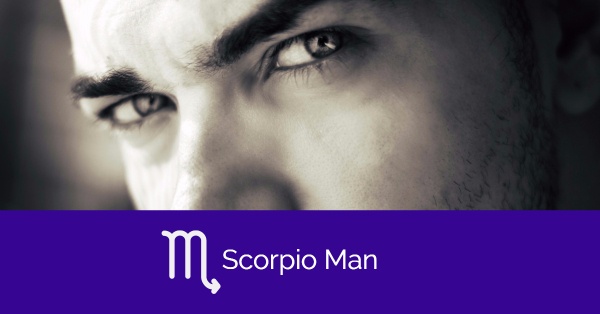 Flat out — these guys are ruled by the thing in between their legs. No joke. He is restless and looking for his next sexual adventure. He can be hypnotic, charming, and just plain intensely sexual. A high voltage sign should be hung from his neck.

Scorpios respond well to kindness and never forget it and always repay. But they can make enemies so easily, partially because he is so damn hostile sometimes.

Often Scorpio men are drunks or prone to a bit of self-destructive drug play. Icky stuff. But because he can muster up power like no one else, he can also overcome those addictions pretty safely.

Scorpio is considered to be a man of mystery. Oftentimes he surprises people by revealing a side of themselves they never knew existed.

Basically, a Scorpio is someone who is somewhat reserved and quiet about their personal lives and will do whatever they can to maintain their privacy.

Even though they’re very private, they’re willing to share parts of themselves with people they trust.

They’re not just persistent, but they’re also really stubborn. The trait is present no matter the situation, for instance, if they wanted to sweep a woman off her feet, they would go against all odds to make it happen.

No matter what, they’ll overcome whatever obstacles stand in their way.

Scorpios are often associated with sexuality, which isn’t always the case.

His goal isn’t to become a promiscuous person who takes advantage of every opportunity. He puts a lot of emphasis on his sexuality and sensuality.

However, he needs someone who loves him, is kind, and cares about his well-being. It’s easy to conclude that he enjoys being in love, and prefers a stable and reliable relationship.

With a Scorpio man, there is no in-between. You’ll find either he’s always available for you, committed, persistent, and very eager to spend time with you.

Or it’s also possible that he is very uncaring, uninterested, and unwilling to spend much time with you. To keep a man born under this sign by your side, it is very important for you to always show that you care about him and that you are there for him since this is something he needs every day.

Don’t expect the Scorpio to be in a hurry all the time. No matter how persistent he is in achieving his goals, he always approaches situations very strategically.

Always taking his time and making sure he calculates everything at every step, he never does this in a hurry. His feelings and emotions seldom lead him to leap into something blindly.

His way of doing things requires him to take his time, no matter how long it takes. This is how he develops feelings, too. One moment at a time, slowly. 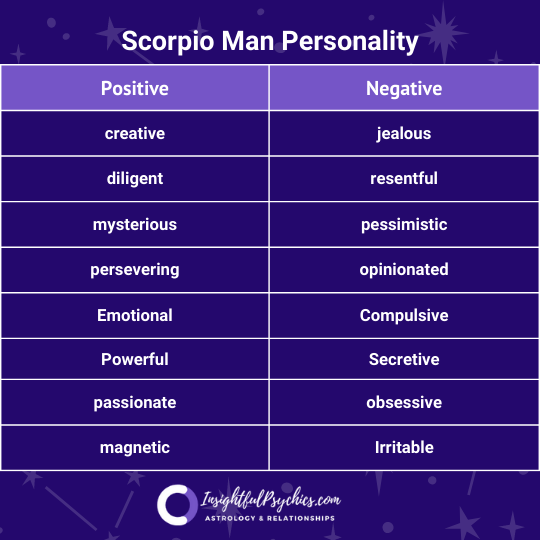 Having affection is one of the most crucial things to this man when it comes to being with someone. While some view him as overly sexualized, he has his moments when he just wants to cuddle with a loved one and lay in bed.

He is a guy who likes to make the most of lazy Sundays but makes them enjoyable with his mate.

In that sense, his ideal partner would be willing to spend a lot of time with him. After all, he wants to devote all of his time to his partner.

If he is in a relationship with a partner who does not give them enough time, he won’t be able to stay happy.

Something absolutely essential to this man is having a close connection and intimacy with their partner. As much as romance is wonderful, his need for affection is overwhelming! He craves having a close bond with his partner.

He wants to go beyond being their lover, he wants to be their best friend. This man needs to have a strong sense of friendship, love, tenderness, and closeness with the person he loves.

The man will want all of these things in spades since he’ll be spending a lot of time with the person chosen to be his companion. It would be ideal if they had similar relationship goals.

He does not like relationships in which there is no communication. Relationships that are only temporary or nothing more than a fling don’t impress him.

Such relationships with this man are unlikely to last. He craves substance!

Scorpio men love sex, which is a significant aspect of their relationships. Regardless of how long they’ve been with their partner, they place a high value on intimacy.

It’s important to them, even in casual relationships that could become more serious.

As well as in the middle of a fling, even if it won’t last. ( contradicts the substance part we know! this man can be complicated in sex).

Fresh ideas, new places all of it! The good part about this is that he gives back as much as he takes. Assuring that both parties will have a great sex life together.

He’s a real firecracker in bed! The best part about him is that when he’s in love, he wants more than sex! Don’t let this man get away!

The first time you get to know this guy, you may find him very discreet and secretive. His reserved nature might be something that causes pause.

His elusiveness or enigmatic nature might seem a little mysterious to some people.

Just don’t think for a moment that he is not interested whatsoever. Those aren’t signs of him being disinterested. They are indeed a little bit more reserved than most.

Usually, this is because they feel it is best to move into a relationship slowly. There’s almost a sense that he thinks everything would be better if it were a little more easygoing.

It allows him to relax and open up to his partner. This will allow him to share more about himself, what he’s gone through, and even share some of his experiences.

Most importantly, he can start expressing his personality.

When he builds a rapport with a girl and trust is established, everything becomes much easier. He will open up once he feels the chemistry and the mood is lighter.

He will be open to talking about anything currently on his girlfriend’s mind.

They will absolutely enjoy their alone time with their girlfriend. Whether or not they’re having fun or they’re out taking advantage of those private moments.

It just gives them more time to gain intimacy with their partner. And allows them to grow closer as a couple.

How To Get A Scorpio Man’s Attention

How to Attract a Scorpio Man

They are attracted to beauty and elegance and don’t care too much for small talk like the Gemini male.

They are intrigued by beauty and passion, and they are also extremely curious people. To attract him, you need to be open and carefree providing answers to his curiosities, or he may become quickly bored of you.

If you plan to go out on a date with a Scorpio male, you need to attract him by participating in fun, outdoor activities.

They are usually best suited for water sports since their passion draws them to places like lakes and beaches.

To attract him, be prepared to be very outgoing and social. Scorpios love anything social like parties, concerts, charities, and other social events that bring out engaging interaction with people.

Since Scorpio males are especially passionate, they can also become jealous and envious of you, so make sure that you always pay attention and stay focused on him or the jealous side of the Scorpio may come out.

You will need to constantly keep your Scorpio man interested. Scorpios are known to be adulterers and cheaters, so to keep them focused on you takes a lot of skill and intrigue on your part.

Always stay attractive and keep traveling and sports-related activities as part of your relationship or you may find your Scorpio male falling into the arms of another woman.

Scorpio males are also the best love makers always concerned with pleasing women, so you will enjoy the night with your man.

Now, this guy is the type of guy that likes to be with somebody that’s passionate about life and the life that they live. In one regard he’s the opposite of a cancer guy, he can do without the sweet aspect.

He’s attracted to a woman that has a very sharp mind but also has a very sensual side to her as well. The big thing to note is that without a sharp mind his impression will start to fade. He needs that mental stimulation.

He’s not the type of guy that you play Coy with, because he doesn’t like to be manipulated in any type of way.

The most important thing you have to remember though is that this guy himself is very much into discretion. Not just within the relationship aspect of life but also in business as well.

Make sure that any advances you make towards him are done in private between the two of you, and not with any people being around being able to see.

For your first date, it’s best to go with something that’s a little bit more feminine and sophisticated with your clothing choice.

Make him say wow in his mind. A sweatshirt and yoga pants will definitely not get the desired outcome that you’re looking for.

Don’t pry into his personal life when it comes to asking him questions to get to know him right away. Leave those types of questions for a later date.

Try going for imaginative conversations to get his mind going, and for food choices maybe pick somewhere that has exotic foods.

Being flirty is never a bad thing either.

This is a man that prides himself on his ability to control a situation.

That doesn’t mean that you need to be manipulated into a situation you don’t want to be in, but if you let him practice having a little bit of control over the night his interest in you will become even more so.

Sexually speaking he could devour you if you wish that night because it’s not a myth that he’s a sexy beast. He knows what he wants and how to get it if you allow him to have that.

his zone is his genitalia. I don’t think I really need to go into too much detail about what you should do over that situation.

Sex With A Scorpio Man

Scorpio rules the genitals and is the master of lovemaking. They take their rulership and their talent for seduction seriously so no joking around.

Expect hot, heavy, emotional, skillful, high frequency, and explosive power. He may overwhelm you at first but just relax; this is his astrological territory.

You’re with the connoisseur of sex so you might want to pick up a book or two on the fine art of lovemaking if you want to seal the deal with this man.

Turn Ons: A good girl who is willing to be corrupted. You want to push limits and you’re turned on by the difference between daytime and nighttime behavior. At heart you’re not a philanderer: You’ll commit to two girlfriends at once and stay faithful to both of them.

Turn Offs: Someone who’s untrustworthy, even if you’re not monogamous. You need a strong bond (even if it’s only for one night), and once a woman breaks her side of the agreement, your legendary jealousy and possessive streak come out.