A Pisces is a water sign and is ruled by the planet Neptune.

They are cosmic romantics, generously seeking a soul connection of the highest quality – but sometimes they’re taken in by less high-minded people.

Intuition and emotionality are necessary qualities in their relationships. Partners can expect plenty of affection and emotional support. So who is Pisces compatible with? What makes a good match?

If you’re looking to get with them, think of every day as Valentine’s Day. Romantic dinners, meaningful gifts, and old-fashioned romance – that’s what attracts them in the first place.

Allow Pisces to feel an emotional connection – don’t give too much advice, as it may easily be taken as criticism. Loving them requires always standing by them.

You are a Pisces, They are…

Who Is Pisces Compatible With?

These two are pretty much completely different people, which isn’t a bad thing in this situation. They both will be able to contribute a lot to the relationship. They do have the ability to make a couple that is well-balanced and very happy. Since there’s a pretty good chance this relationship will work out they have good compatibility.

This is a person with that you can feel very connected. They will also bring the understanding that he needs to make this into a very loving stable relationship. This is why they’re considered one of the best combinations.

This couple does have a chance to make things work in their relationship because they do have a lot of compatibility with each other. The only problem is that things are going to start pretty slow between the two of them. At the very beginning, they will both have reservations about the relationship and a little bit of distrust. This is something that they’ll both have to work through.

Who Are They Not Compatible With?

There is a certain attraction between these two at the very beginning of a relationship together. Even though they might fall in love after a little bit, issues can arise that could be quite serious and detrimental to the couple. They both tend to be unpredictable/volatile in situations and this is why they have what’s considered low compatibility.

This is because even though there will be a lot of happiness and passion between the two of them, situations can arise where there might be arguments that lead to breakups. What they need to do is set boundaries and understand what each other is willing to put up with. If they don’t do this then the future doesn’t look too bright for them

These two work together really well as friends and that’s pretty much it. When it comes to a relationship there are a lot of situations that could arise between the two of them that would end in a breakup. They have a lot of differences between each other which is why they have what’s considered low compatibility.

When it comes to friendship, Scorpio is considered one of the best signs for you. Your astrological aspects are perfectly matched when both signs are combined. In addition, this will strengthen or enhance the bond that you both would share together. There is a genuine connection between you.

Pisces also makes good friends with Taurus and Capricorn. These signs can respect and maintain discretion. At the same time, they offer you honesty, reliability, and trust. They are also very good at listening to you and giving you advice when you need it. By combining wisdom and support, these signs can help you create a more prosperous future. Honesty, however, is the key to getting along with them both.

They have good friendship matchups with: Capricorn, Taurus, Cancer, and Scorpio.

Pisces Cancer love is quite effective as Cancer enjoys taking care of Pisces and Pisces enjoys being cared for. The problem is neither deals with reality very well and they must force each other to pay attention to the world around them. Pisces’ willingness to absorb Gemini’s eclectic world can make for a very strong relationship. Gemini will be attracted to Pisces’s creativity and Pisces will be attuned to Gemini’s need for variety and independence. The Pisces Taurus relationship will be very satisfying as Taurus will give Pisces stability and Pisces will stimulate Taurus’s creativity. Leo is another sign that works well with Pisces. Their opposite natures serve to make the relationship stronger as each provides what the other lacks.

Who Is Pisces Sexually Compatible With?

Looking at Pisces astrology sex profile it seems Virgo is made for this sign. Both believe in the fairy tale ending and want nothing more than to satisfy the other in bed. If Pisces can be a bit more forthcoming in their sexual fantasies then the bedroom can become quite steamy. Pisces Libra love will flourish under a canopy of desire and fantasy. Both have an insatiable need for love and romance and will spend hours on gentle foreplay and fantasy play before actually getting down to business. Aries and Pisces are on fire in the bedroom. Pisces’ gentle and relaxing nature can slow down Aries’s full-on attack. This makes for some rather increasing sexual tension that will explode into an all-consuming conflagration that will take hours to die down.

Remember that all situations are different and it is best to get a personalized reading and take an introspective approach.

How to Love match up with a Pisces

A Pisces female not only has a hard time making decisions, she also is very stubborn about deciding on the decision.  She is very slow to react to situations because of her perfectionist ways.  She needs to realize with your help, that she doesn’t have to make a “perfect” decision and that if one choice doesn’t work, she can always go back and try again.

A Pisces Man is the most sensitive sign of the zodiac and at times can appear to be wishy-washy.  He is a dreamer and hates it when his dreams are destroyed, especially if he’s looking at a long-term relationship.  If a situation gets too overwhelming for him, he can lose confidence.  In order to keep him on an even level, use your logic to counter some of his emotions, especially in a practical sense, but at the same time, also learn to understand his feelings and see things from his point of view.

Positively, a Pisces is matched with Capricorn, Taurus, Cancer, and Scorpio.

Neutrally, they are related with Aquarius, Aries, Leo, and Libra.

They can run into problems with Sagittarius, Gemini, and Virgo.

Connected with another Pisces, creativity abounds, however there are no practicality. 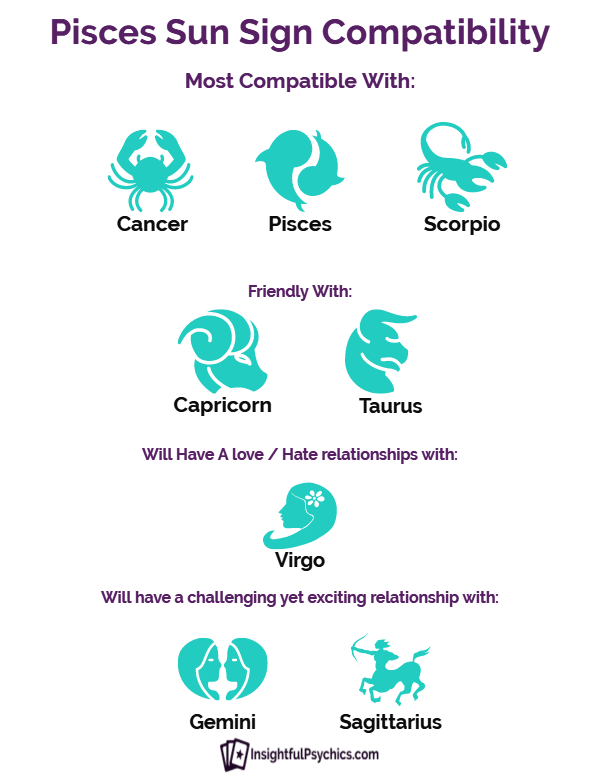 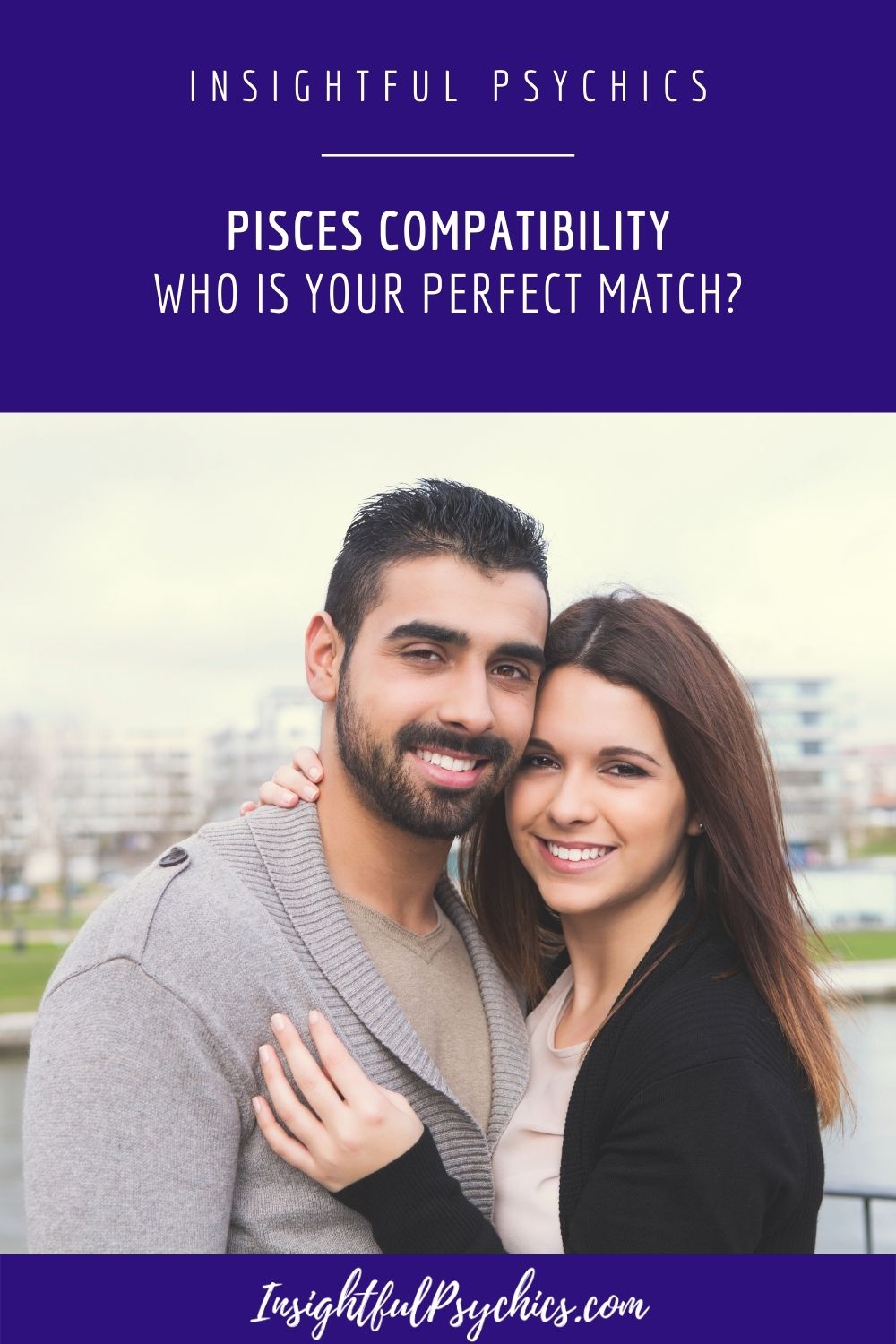