I represent your physical vitality, assertion and drive, how you initiate actions and react to circumstances in your life.

Mars is the planet of energy. It reigns over willpower and the urge to violence or wild activity. The Sun symbolizes life and the Moon maintains it. Mars on the other hand brings energy into living matter and grants an enterprising spirit, stamina, courage, and daring. The energy of Mars is primarily focused on existence. Mars is the counterpart of Venus: war and peace, hatred and love! The energy of Mars, however, cannot be missed, it gives the energy to tackle things to continue. Coffee, for example, is a typical Mars drink, it energizes.

A malefic position of Mars in the birth chart could lead to restlessness and recklessness. Egocentric behavior is emphasized, a Mars-type speaks his truth without thinking. Aggression, each incident is an opportunity to argue. This may turn out cruel. Rudeness, brutality.

Additionally, Mars symbolizes movement, freedom, vitality, masculinity, struggle, action, and war. It is the personification of the male, lover, soldier, pioneer, the captain. Everything that sticks, cuts, or penetrates belongs to Mars, syringes, surgical operations, surgeons. 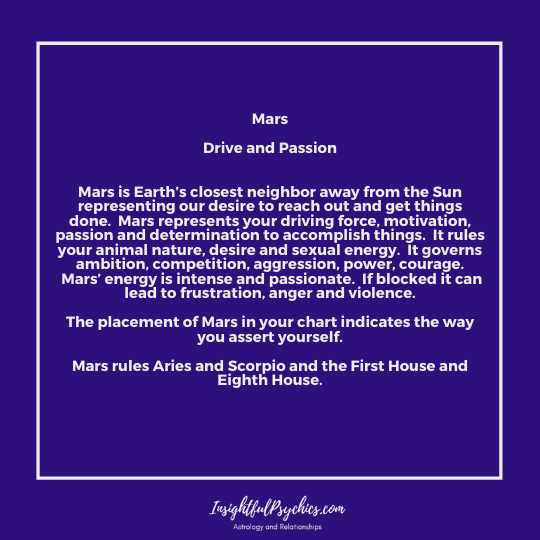 Sincere, straightforward, courageous, enterprising, perseverance. The Mars-type is more suitable for practical assignments than for spiritual reflection. Talent for strategy; dynamic, but he easily dominates other people. Very sportive.

Mars is the fourth planet in order from the Sun in our Solar System. It takes the planet close to two years (687 days) to complete its journey around the Sun. This planet is famous for the intense orange-red color of its light and for that reason Mars is often called the ‘red planet.

Mars is the energy principle in the horoscope. This planet rules our initiative, drives, and action. The position of Mars in the natal chart by sign, house, or aspect describes ‘how’ and ‘where’ you direct your energy and what motivates you as well as how aggressive and competitive you are. The analysis of the planet Mars illustrates how the Sun (ego) and the Moon (desire) express themselves in ‘action’. This planet also rules our sex drive, the ‘male principle’ and its position in the horoscope reveals your appetite for sex and your attitudes about it.

If you have strong Mars or some planets in Aries in your chart this saying will probably appeal to you ‘I want what I want when I want it.

Mars In The Signs

Mars, Aries ruling planet, enhances physical stamina, assertiveness, the ability to act decisively, and a straightforward approach. The conjunction of Mars with the Sun increases an already generous reserve of emotional and physical energy but may encourage rashness or overwork.

Mars strengthens the masculine aspects of both male and female Taureans. Mars is a positive influence in respect of determination, the ability to stand one’s ground where needed, and in boosting energy when hard work is required. However, Mars may also add to the strength of the explosion should the Taurean individual become angry or enraged, making it hard or even impossible to consider the feelings of others.

Mars has a strong influence on Gemini’s competitive streak and responses to stress. Exercise can be a good way to release stress and take advantage of the energy Mars provides, in a positive way. Whether you are a male or female Gemini, built-up tension can result in aggressive or unpredictable behavior.

Mars has a considerable influence on Cancerian sex life at times, increasing innate sensuality and desire. Whether you are a male or female Cancerian, Mars influences your ‘masculine energies, adding to your natural intrepidity to get the job done or to be assertive. At times, however, this could mean an increase in aggression or shortness of temper.

Mars fits well with Leo’s organizational abilities, enjoyment of life (especially sexuality), and the positive expression of emotion, but where Mars has an influence, the tendency to ‘stage a scene’ or to behave pompously, is increased.

Mars influences the masculine aspects of the Virgoan, whether male or female. There is likely to be an increased capacity for work, especially the work of the mind, and a decisive approach to work that manifests in calm confidence to be assertive. This confidence may go with you into the bedroom, too. At other times, you may experience a rise in aggression that comes from increased tension and restlessness.

Mars adds more sexual activity to romance but may encourage the Libran towards ‘falling in love’ without going on to form the deeper emotional ties Librans crave. The influence of Mars encourages a relaxed approach to life, but may also militate against getting things done.

Mars strengthens the masculine energies. Whether Sagittarians are male or female, the influence of Mars enhances the physical and mental energies, and increases the desire for adventure, though here it is essential to check the wisdom of chasing whatever is on the horizon. In other circumstances, Mars may add to your tendency to fly off the handle or wipe someone out verbally.

Mars increases Capricorn’s determination and staying power and helps overcome obstacles to goals. In other circumstances, Mars may promote aggressive tendencies, anything from grumpy behavior to full-blown anger, or the individual may see-saw between self-possession and uncharacteristic outbursts

Mars energizes the masculine aspects of the Aquarian nature, whether male or female. Mars can promote organizational abilities, especially at work, but may reinforce an innate tendency to shut others out.

Mars can strengthen the ‘masculine’ energies of either male or female Pisceans. A rise in ambition may be experienced as the individual cooperates with this influence to achieve goals. The influence of Mars may help the individual to be more physically assertive in sexual intimacy without depending on sentiment or romance to carry the day. In adverse circumstances, Mars may influence moodiness towards displays of anger.

Mars, the planet of aggression, action, and sex. Mars is considered the ruler of Aries, and the traditional ruler of Scorpio. Its natural houses are the 1st house and the 8th house, respectively.

In the astrological chart, Mars is considered a personal planet, reflecting basic psychological functions in the personality.

Notable astronomical characteristics
The red planet gets its color from iron oxides covering its surface. Mars bears the deepest known canyon and the highest known mountain in the solar system. Mars knows the largest sand storms as well, sometimes covering the entire planet! Mars has a very thin atmosphere and no clouds, which makes its underlying surface very clear to the observer’s eye.

Astrological qualities
Mars is super-personal in that it is fundamentally concerned with itself, its own preservation, and perpetuation (procreation). It is proto-whole in that it is the function that enables the self to exist as a separate whole. Mars is the son of the moon as it is instinct beyond conscious will and thus more closely related to the moon than to the sun (contrasted with Venus).

Fundamentally, Mars is the competitive drive in the personality, the desire to advance oneself in a competitive world. Mars brings in the intense feelings and the subconscious desire to advance one’s genes, however lacks the will to stay. It complements VenusSymbol of Venus, which brings in the attachment principle. Without Mars, Venus will stay on a superficial level. It is lust as the desire to mate with another, and envy as when its competitive drives seem thwarted.

Certainly, it is the libido in its broader sense – it is the motivational force and the more intensive drives of the personality, as well as the root of all passions. Similar to Venus, it is actually superfluous to the basic personality and can push the person to excessive expressions of self-worth through sexual value. It is the place where we seek to prove ourselves, how we prove our worth through doing and succeeding, which subconsciously really serves to prove our sexual prowess.

Mars’ function further divides in two ways – the irritable/reactive side which acts as an extended protective mechanism, and the general pool of energy and drive which allows for intensive, sustained effort in areas that are not necessarily associated with pleasure, eg. hard work for whatever purpose. Accordingly, a listless Mars can do much to take the edge off of the personality.

In a sense, it is part of the irritable side of the personality, the part that deals with anger and the immediate self-protective response, although it is mostly superfluous to the function of the MoonMoon in this domain, as an extra self-assertive mechanism to better one’s strength, as it will reflect in the eyes of potential mates.

In general, Mars is more in-tune with the lower, most basic self-preserving drives in the personality, the parts that deal with the most burning needs. It mostly concerns itself with sex, sexual image, and self-protection. It reflects the hard, sexual appetite. Mars is also associated with the inner warrior in every person.

Mars does things in a more riské, sexually insinuated, forceful, and rough way. It does not seek to beautify itself or “make nice”, instead of seeking to bask in a more sexual light, exhibiting personal strength (domination) and skill as a seductive mechanism, however it may often get the opposite result in modern times. Mars is associated with low energies – sexual drives, anger, and resentment. Whatever planet touches it may suffer from these rough energies. It adds a lot of restlessness and impulsivity, a quickness to jump to conclusions. It makes it more competitive.

Dynamics with the sun and moon
When “ignited” (irritated), a strong Mars can cause serious strain on the Sun if she is positively principled, and on the Moon, if it reflects compassionate emotions. If these are more negatively inclined, the person will more readily act on these aggressive drives.
Mars’ influence on the Sun is making it more assertive as proof of sexual potency through the expression of personal power. It also drives it to be more able.

The house where Mars is located is where the personality’s excess energies naturally seek their expression. It also reflects how and in what direction one goes about reaching his desires. It shows the direction one pushes through, in the subconscious bid to better his sexual worth through these libido drives.

In non-natal charts (horary, return charts, progressions, etc) a prominent Mars can show the onset of conflicts, especially when afflicted. In a good setup, it may represent undertaking projects or putting out constructive effort. Oppositions to Mars can reflect a more subdued conflict causing strain, but with not much in damages.
In political charts, Mars can represent The Army.

Next Planet in astrology: Jupiter