To many people, myself included, this is the most interesting of all the signs.

The reason is that these people are not sheep: they do their own thing, in their own way, etc, etc. And in pronounced cases, their way is unusual, quirky, or downright eccentric.

They will not conform to imposed restrictions or trends. They indulge in their own freedom and independence, even more so than Sagittarians, but remaining very friendly and gregarious in the process.

The other strong Aquarian trait is that of humanitarian beliefs. They think for the group, or for society itself, rather than for themselves.

They can though be fixed in their viewpoints and not very adaptable, which can cause problems for them being as their views can be seen as downright odd!

Another infamous trait of Aquarians is their detachment with friends and partners.

Not the most romantic of signs, this aspect is worsened by this terrible habit they seem to have of switching off all emotion when the moment suits them – be it temporarily or permanent.

They love discussing their ideas and concepts with others and are just as eager to hear those of other people as well.

Aquarians are almost always champions for humanitarian causes as well.

They come into this life with a strong desire to leave the world a better place than they found it and they have an inherent need to make sure life is as fair as possible for all people.

Many Aquarians devote much time and energy to charity work or social causes.

Quite a few even make other people their profession, seeking out careers in social services, medicine, or other people-oriented fields.

A defining Aquarius trait is that this sign will march to the beat of their own drum to a greater degree than just about any other zodiac sign out there.

Many could even easily be called eccentric and they tend to seek out the company of other eccentrics like themselves – creative, exciting, and inventive individuals who instinctively think outside the box.

Aquarius natives are unpredictable types who can sometimes be so energetic and unconventional as to seem scattered.

You never know what an Aquarius will do next.

These are the type of people that almost always zig when you expect them to zag, keeping those around them on their toes perpetually.

One of the most widely known and misunderstood Aquarius traits is the sign’s trademark tendency toward what many see as emotional coldness.

They are terrific people to have on your side in a crisis, not only because of their innate ability to solve problems, but also because of how good their handle on their emotions makes them in a crisis.

However, Aquarians must take care to make sure they don’t develop a tendency toward tactlessness or cruelty as a result.

One of the Aquarius traits that is most obvious is that those born with this sign hate being forced to live life from the inside of a box.

They naturally question authority and the status quo, refusing to follow rules unless someone can prove to them that said rules are sound, fair, and beneficial first.

Most Aquarians are also firm believers in the concepts of democracy and humanitarianism.

It’s actually even possible that this rebellious aquarius trait could lead to a belief in anarchy in some, should it be pronounced enough.

Profound Knack for Technology and Invention

Another trait of the Aquarius sign is that it is that they have a high level of energy.

Most people born under its influence can’t stand the idea of being bored and seek out constant interaction with the world around them.

When it’s not possible to connect with other people, many of these natives will find solace in working with computers or machines.

An Aquarius who isn’t enchanted by modern technology and all of the latest gadgets is hard to find indeed.

They often collect them, as well as other unusual things, and possess a pronounced knack for understanding and working with them.

It’s a common Aquarius trait to have a knack for building or fixing computers or other machines.

Aquarius is the eleventh sign of the zodiac and is symbolized by the water-bearer.

Aquarius symbol or glyph represents two ripples of water, or the conducting waves of energy such as light or electricity.

The Sun is in Aquarius from around 21 January until around 19 February every year.

Aquarius is classified as being of the positive polarity (expressive & spontaneous), of the air element (intellectual, communicative, and mentally active), and of the fixed quality (intense, steadfast, and resistant to change).

Aquarius has a detached, sometimes scientific or even clinical attitude, expressing unconventionality, with an urge to identify with the progressive aims of society and of the community.

The Aquarius type is original, inventive and progressive, and has strong idealistic aims and humanitarian feelings.

Aquarius is ruled by the planet Uranus and is unpredictable and erratic, attracted to the radically new and the unusual, frequently scientifically inclined, and generally friendly.

Aquarius rejects worn-out traditions and old ways of operating and can enjoy antagonizing people in positions of authority.

Aquarius dislikes routine and would prefer to be with those who are ushering in a newer order and fostering advanced thinking.

Friends are important to Aquarius, especially those who share common ideas and interests. Aquarius is a good team player, but one who must have personal freedom.

Indeed, Aquarius resists anything or anyone threatening its independence.

Aquarius can put a great deal of energy into a cause, but can also be dogmatic, and allow adherence to its own often revolutionary and unorthodox opinions to detach it from more mundane reality.

Often somewhat aloof and impersonal, Aquarius’s approach is always somewhat in the abstract, with ideological concepts of the sort that don’t usually stem from true emotions.

Aquarius has a good conceptual understanding of human nature but can lack sensitivity to the emotional content of many human situations.

Unintegrated use of the Aquarius manner can become expressed as perversely eccentric or merely cranky, fanatically rebellious and rudely tactless, with a lack of personal integrity and principle, and too detached and erratic.

Physically Aquarius rules the calves and ankles, as well as the circulatory system generally. There may be a tendency to varicose veins, sprained or broken ankles, or circulatory and cardiac disorders. Aquarius is especially associated with, or “ruled” by, the planet Uranus.

Good Side of Aquarius

They’re sincere and show genuine interest in people around them, as well as in those they read about online and in print. They are curious people by nature.

They place a high value on friendship. They ensure that they always form close relationships with people and build strong foundations when they become friends.

This is a person that really needs commitment in their life. Loyalty is one of the most valuable gifts you can give them, and they will return the favor.

They don’t like to be tied down in any way. Freedom and independence are important to them. The true meaning of a free spirit.

They don’t like to be told what to think. Instead, they prefer to be creative thinkers. They believe that there should only be independent thinking, and they will not respect someone who tells them what to think.

They are highly creative, artistic, and imaginative. They often strive for fame in life.

Most of them are good at speaking to people, but not always at conversing. Other people need to initiate conversations sometimes.

They have a very nurturing and caring nature with family and friends alike. They want to ensure that everyone is taken care of.

The bad side of Aquarius

Sometimes they are overly private or tend to keep secrets, even about things that they know others should know about.

They can show signs of selfishness and egocentricity. Their self-centeredness might come across as arrogant to others.

One moment they may show insecurities or nervousness, and the next moment they might take over the spotlight.

When they want to convey something, they can be very blunt in conversation. When they do so, they don’t consider other people’s feelings. This can lead to hurt feelings.

They are also known to be very unpredictable at times and can be erratic. 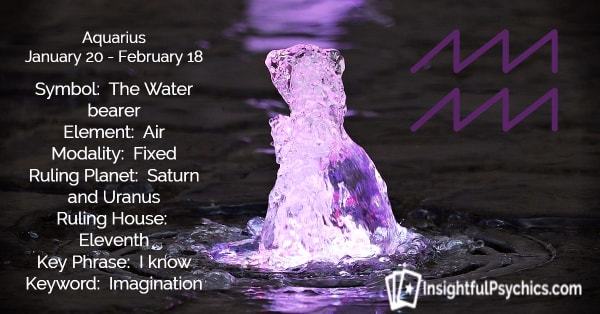 One of their most distinguishing characteristics is that they have a very giving and compassionate nature. At the same time, they have a naturally creative, playful, and adventurous side, and they are always learning new concepts. Of all the signs, they are more likely to have a career that would be considered unusual or unconventional. They would prefer not to work in a corporate environment. Their desire is to be independent, not to be worker drones. They are truly looking for autonomy in the workplace. It is important to them to be able to move around as they please and to be able to express themselves in a way that they desire. For them, the same old way of doing things will not suffice. If you want a fresh approach or perspective on something, these are the people you go to. For businesses that are looking for these types of people, they will not let you down at all.

The best jobs for them are as follows:

Having the opportunity to develop new ideas and theories as a researcher or scientist. Inventors and innovators. Aviators or airline pilots. Designers or artists where they can apply their creativity. Theatre and film actors. By developing their musical talents, they can become musicians or singers.

( BLACK FRIDAY) 70% off PSYCHIC READINGS with this coupon click now