The least showy of the three fire signs but nevertheless just as outgoing, frank, and eager as the others.

Whereas a Leo will tend to push himself forward in a gathering to be the center of attention, (and the Aries has already been and gone!) the Sagittarian will coolly wait for the best moment and often receive the best reaction by doing so.

By fire sign standards they are rather sensitive folk and can feel emotions almost as if they were a water sign.

They share many qualities of the air sign Gemini when it comes to learning and the pursuit of worldly knowledge.

However, they often lose interest soon after finding their goal and move on to the next quest.

They are more adaptable and flexible than the other two fire signs and by nature very honest.

But the biggest keyword to describe them is optimistic – for this reason, they rarely get on well with true Virgos, because that earth sign is the most pessimistic of all twelve signs.

Travel is second nature to a Sagittarian, even if it is only in the mind.

They share a high degree of independence and freedom with the air sign Aquarius, for which reason these two signs often gel well.

Sagittarians are at their best when their mind and body have the freedom to explore things as they would like.

In relationships, Sagittarians often prefer the thrill of the chase to the actual conquest, and are generally very hot-blooded, especially if Scorpio figures highly in their chart.

They are the most likely of the three fire signs to put their foot in it, dig a hole, and never know when to stop digging!

Although a Sagittarius native can instinctively tell the difference between a person of solid character and a shadier individual, they would far prefer to keep company with those who are interesting over those who are simply nice.

Sagittarians like people in general, but they can’t stand being bored or keeping company with bland individuals.

Its a Sagittarius trait to love knowledge almost as much as they love travel and adventure.

Most people born under this sign absolutely love to read and gravitate heavily toward stories about other lands, culturally relevant works, and spiritual texts that help them expand their minds even further.

Spirituality in particular is an avenue by which many Sagittarians approach life’s biggest questions and mysteries.

Many will never settle on a particular stance or mindset, but the ones that do can exhibit a tendency toward dogma that really rubs friends and acquaintances the wrong way.

Great care must be taken to see that this does not happen.

They love to explore deep or philosophical ideas, especially though conversation.

They dislike small talk with a passion and will generally avoid it at all costs, not seeing the point of many social niceties other people consider important.

If there’s one thing a revealed by Sagittarius traits, it that they truly hate to be fenced in or forced into a box.

Given the choice between freedom and security, these are people who will choose freedom each and every time.

If they ever do make a commitment to a career, a relationship, or a place of residence, you can rest assured that it is an unconventional situation that allows them to have their cake and eat it, too.

However, its a trait that even the happiest Sagittarius will sometimes wistfully look off into the distance and wonder what else might have been.

Wanderlust is simply something that’s in Sagittarian blood and people born under this sign often continue to search and seek throughout their lives one way or another.

More than any other sign, Sagittarius is the great adventurer of the zodiac.

A typical Sagittarius believes that experience is a much better way to learn and grow than school is and what better way to get a sense of the world and how it works than to go out and experience it first hand?

These are people who love to travel and are most in their element when exploring new places or meeting new people – especially those that hail from faraway lands.

They won’t be the sort to seek out luxury hotel accommodations when on the move either. Instead, they prefer to immerse themselves in their surroundings and rub elbows with the locals

Despite being social, extroverted, and extremely jovial people, Sagittarians also possess a tendency to overlook the feelings of others and it is a Sagittarius trait to say the wrong things at times. Its a trait for them to be very honest folks.

However, they are honest to a fault and their bluntness and lack of tact can hurt other people’s feelings or leave acquaintances feeling slighted.

They are typically completely oblivious to the effects of their tactlessness though.

They simply assume that because they are so good at being honest with themselves that other people are built similarly when in fact, more sensitive individuals need to be handled with far greater care than your typical Sagittarius requires.

Sagittarius is the ninth sign of the zodiac and is symbolized by the archer, while its symbol or glyph represents the archer’s bow and arrow. The Sun is in Sagittarius from around November 23 until around December 23 each year. Sagittarius is classified as being of the positive polarity (expressive and spontaneous), of the fire element (ardent, keen, energetic, and assertive), and of the mutable quality (adaptable and variable). Sagittarius displays an extensive, wide, deep, and free-ranging attitude, expressing freedom, and associated with an urge to explore beyond the immediately known environment.

The characteristic Sagittarius type seeks space, freedom, and opportunity through which to range and aspire to the highest of ambitions, both physically and mentally.

The wide, deep, and extensive nature of Sagittarius is displayed either physically, such as in sport, adventure, exploration, and foreign travel, or mentally, in deep, profound, or philosophical higher study.

Gregarious, enthusiastic, and open, Sagittarius likes to understand from a broad and deep perspective.

Sagittarius is usually idealistic, foresighted, and high principled, though sometimes with religious and moralizing tendencies.

Though for the most part happy-go-lucky, honest and cheerful, Sagittarius can nevertheless take its extensive and optimistic aim too far, becoming extravagant and exaggerating, with trouble focusing on the less welcome practical details.

Overuse of the Sagittarius manner can become boastful, careless, over-enthusiastic, and too restless.

Without some counterpoint of structure, the boundless optimism of Sagittarius can become extremist, and irresponsible, and unreliable.

Sagittarius’s inclination to be bluntly honest, frank, and, like an arrow, straightforward and to the point, can become tactless and inconsiderate, and sometimes wound like an arrow.

Physically Sagittarius rules the hips, thighs, and sciatic nerves. Sagittarius can have a tendency to hip diseases, sciatica, rheumatic, and liver complaints. Sagittarius is especially associated with, or “ruled” by, the planet Jupiter.

Let’s break down the Sagittarius Personalities into the Decans

Good side of Sagittarius

It doesn’t matter who’s around them or whether they bring a positive or negative influence to their lives, they cannot be held back. No matter what negativity comes their way, they know they have a bright future.

Positive vibes from them can really change a person’s life. People can be motivated by them and inspired to do better. Their goal will be to motivate and inspire people to reach higher heights in life.

They’re always dedicated to whatever they’re doing. They make sure everything gets done.

It is their positive attitude and enthusiasm that make conversations more enjoyable.

Getting out of the concrete jungle and into nature appeals to them. These are people who love nature.

This is an individual who does not harbor any malice toward anyone. The nature of their character does not allow them to harm other people.

It is not uncommon for them to be overly generous when the mood strikes them.

They usually don’t take into account or notice the attractive and sensual traits they possess. The truth is, they don’t realize they have a lot of good qualities. They might need someone to tell them that.

Bad Side of Sagittarius

A lot of the time, they react very quickly to situations and can be quite impulsive. When they pass judgment, they can sometimes not go back on it because they can be firm and harsh.

Since they think their own opinions are true, it’s hard to get your point across when they’re arguing. You might be able to convince them otherwise.

Sometimes they’re the type of person who makes a move before really thinking about it thoroughly. This kind of impulsiveness can get them into trouble.

It is easy for them to become restless in life. Hence, there must be things that hold their interest, regardless of whether they are Hobbies or people they care about. Their lives cannot be dull.

They hate being restricted in their life. Freedom is the most important thing to them.

Their reputation isn’t one of taking a step back and letting arguments simmer. Often, they prefer to get right to the point and argue their case rather than leave things alone. 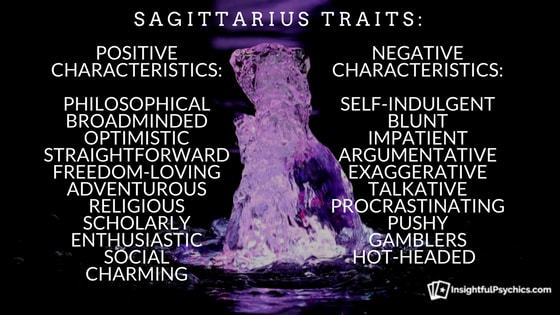 These individuals are enthusiastic, honest, virtuous, and intellectual by nature. They make outstanding decisions with excellent judgment. They are also seen as very fair and honest at work, as well as accepting and forgiving bosses. Some of them might have spiritual tendencies, making careers such as the outdoors and environment well suited for them. For example, helping animals and counseling those in need. Occasionally, they might move into a career that deals with religion. Many of them have a passion for travel and the outdoors. In addition to being fun-loving, outgoing, and playful, they can handle many stressful situations at work with witty humor and good tact.

The best jobs for them are as follows:

Communications, social media, and public relations. As a coach or trainer, depending on whether or not they are helping someone with their fitness or mental health. Anything related to travel or international travel. Editing and publishing would also be great opportunities. They would be great as veterinarians or zoologists. If they are spiritually inclined, they would do well in the ministry or as a clergy member.