Very serious in outlook, these are possibly shyer and retiring than Virgos and often loners.

Yet they are strong-willed, determined people and many a Capricorn has gone on to great things (especially if Mars is also in Capricorn) thanks to their dogged determination.

They are regularly openly mean and selfish, and somewhat cold or even hard-natured people – this is very evident if their Moon is in Capricorn.

It is the sign most often referred to as being the most boring, but they do however often have a highly developed dry sense of humor.

Unless countered by more favorable signs in their chart, they can appear old before their time.

The Capricorn impatience is almost unique to their sign, certainly not the typical impulsive Aries type impatience.

It drives them along in a responsible, pondering sort of way that often leads to setbacks because they did not wait for the right moment.

Like Taureans, they resist change, respecting the tried and tested methods of doing things.

Another one of the key Capricorn traits is that those born under this sign are logical, analytical folks.

Although this can sometimes come across as detached or disconnected to the untrained eye.

They don’t like to open themselves up to the possibility of being hurt, so many are reserved individuals who do not wear their feelings and emotions on their sleeves.

It is also a Capricorn trait to be terrified of public humiliation or ridicule.

They tend to handle their problems, sorrows, and disappointments on their own instead of sharing the load with others, so even those closest to a Capricorn may sometimes get the impression they don’t really know them.

It’s a Capricorn trait to be a rolling stone that gathers no moss.

They believe in well-roundedness and being the absolute best you can be.

Not only is it one of Capricorn traits to work hard, but they tend to have many, many productive hobbies with which to occupy their free time.

They also tend to make sure they’re perpetually in good physical condition.

Most will be sure to exercise on a regular basis, eat right, and avoid overindulgences of all kinds.

Although you wouldn’t necessarily figure that a sign ruled by a planet as serious and stern as Saturn is would possess a profound affinity for humor, Capricorn natives most assuredly do.

A sense of humor is one of the defining Capricorn traits.

Granted, their humor leans toward the dark and sarcastic side, but these folks nevertheless are very well-known within their social circles for really knowing how to make people laugh.

Additional Capricorn traits include the desire to be traditional and diplomatic.

They know what to say and how to say it to get the results they’re after and they tend to avoid drama or conflict to the greatest extent possible.

As Capricorn’s trademark self-consciousness trait can sometimes lead to self esteem problems, it is not unusual for many of these natives to exhibit a tendency toward melancholy or depression.

Alternatively, they can develop nervous disorders and issues with anxiety.

These are people who are very hard on themselves and who are never quite able to see the fruits of their labors as good enough no matter how successful they may become.

Great care must be taken to make sure these problems do not spiral out of control and lead to full-blown clinical issues with depression and/or compulsive disorders.

If there’s one thing a Capricorn instinctively does best and knows a lot about, it’s working and earning money.

They’re not so bad when it comes to investing money or managing it either.

Most Capricorns come into this world possessed of a strong need to build and maintain a sizeable nest egg, as there is nothing more frightening to these natives than the idea of being poor or not living a secure life.

This tendency combined with their inherently strong work ethic means that Capricorn natives make wonderfully reliable employees and business partners who really do have success in their blood.

However, Capricorns must take care not to let their natural practicality mutate into stinginess or miserliness as the years wear on.

Placement: 10th Zodiac Sign
House Ruled: 10th House: House of Reputation and Career
Constellation: Capricorn
Element: Earth
Quality: Cardinal
Symbol: The Goat
Ruling Planet: Saturn
Detriment: Moon
Exaltation: Mars
Fall: Jupiter (ancient)/Neptune (modern/disputed)
Masculine / Feminine: Masculine
Key Words: “I Use”
My Pleasures: Respect, success (of course because they work so hard to get it)
My Pains: Laziness, disorganization, and messiness
Qualities: Wise, Discrete, Determined
What Capricorn think about themselves: I want others to love me!
What others think about Capricorn: Ask them anything, they cannot say no!
Chinese zodiac sign counterpart: The Ox

Capricorn is the tenth sign of the zodiac and is symbolized by the Goat, while its symbol or glyph represents the goat’s hard horns.

The Sun is in Capricorn from around 23 December until around 20 January every year. Capricorn is associated with the harshness of winter and its stark realities.

Capricorn is classified as being of the negative polarity (passive and receptive), of the earth element (practical, cautious, and restrained), and of the cardinal quality (outgoing and enterprising).

Ruled by the planet Saturn, Capricorn has a cool, rational attitude, expressing prudence, associated with an urge to conform to disciplined behavior and to aspire.

Ambitious, serious, and dedicated to duty, Capricorn is serious, sober, practical and disciplined, and works for respectable worldly status.

Capricorn has an inborn ability to bear hardship and frustration because its nature is conditioned to the necessity for discipline, self-containment, and a serious and responsible attitude to life.

Capricorn knows that life is difficult, but its patience is never-ending, and it aspires to be the type who will nevertheless triumph and achieve success through sheer patience and the endurance of adversity.

Capricorns keywords are discipline and prudence, and its nature is to plan, carefully, coolly, and deliberately for the achievement of its ambitions. Capricorn is strongly goal-directed and is very persistent in its aims, possessing an aptitude to persevere no matter how difficult the path it must tread.

To this end Capricorn plods on, climbing the ladder of ambition and career slowly and surely, with conscientious, dutiful, punctilious concentration and industry.

Capricorns attitude is conservative, with time, money, and all other resources.

Overuse of the Capricorn manner may be severe, pessimistic, sour, harsh, exacting, and even cruel. Too much emphasis on Capricorns rational, sober and respectable side of life can make one too conventional, a wet blanket, narrow-minded, unfeeling, critical, and miserly, with dreary worrying over joyless things.

Physically Capricorn rules the knees, skin, and skeleton. There may be a tendency for skin disorders, knee troubles or injuries, and digestive upsets and depression, often brought about through gloomy worrying and the suppression of happier emotions and feelings. Capricorn is especially associated with, or “ruled” by, the planet Saturn.

Good Side of Capricorn

In a situation where they feel they can win, they are both sensitive and courageous.

They are very hardworking individuals who put a lot of effort into everything they do. In addition, they are well organized.

They are analytical people who can overcome obstacles and solve problems day in and day out.

When they are in a relationship with someone, they are loyal and devoted. They are reliable and trustworthy. They have excellent parenting skills when it comes to their family.

When it comes to achieving their goals or objectives in life, they are very determined to make sure that they accomplish them. This is while staying grounded in reality at all times. They know they must remain realistic no matter what.

They are both practical and logical. Since they give advice logically instead of emotionally, they are good people to go to for advice.

They have an innate sense of duty while always showing respect to authority.

They put a lot of effort into making sure their reputation is always pristine and spotless. Whenever they make a decision, they do it with great care.

Bad Side of Capricorn

It is not uncommon for them to be dominant or very assertive. They will act aggressively if they want something badly enough.

In some situations, they might expect a lot of others. Some people might find them overly demanding.

When they find something easy to do but other people find it challenging, they have a hard time understanding why that is. According to them, everyone should be able to do it if they can.

Their ambitions are high. These ambitions, unfortunately, sometimes overshadow their social lives. Sadly, friends and family take a backseat a lot of the time.

They don’t take kindly to anybody who embarrasses or makes fun of them. They find it very difficult to not just forget the event that occurred, but also to forgive the person for it. 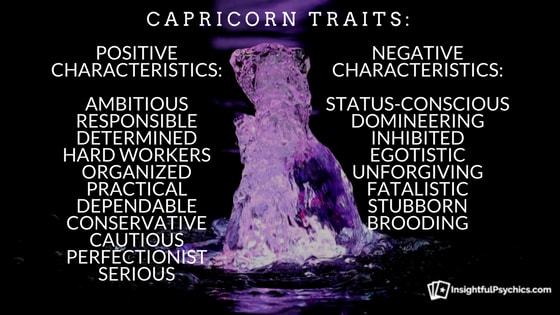 They are very aspirational and driven, and they always need challenges and new goals to be happy. Like their symbol, the goat is persistent, resolute, and stubborn, and they will do anything and everything to get to the top in their career. They are generally very accountable and responsible and are quite aware of what they are doing. Even so, many of them enjoy holding and wielding power. If you want something done right the first time, these are the people you turn to. They demand and expect quality, and when something is done it is done well. They work very hard to meet deadlines and stay on schedule. As a result, they tend to be workaholics.

As such the following are the best jobs for them

They can make excellent managers and CEOs since they are very determined. They are trustworthy, so you can count on them to be good trustees or assistants. They also make excellent editors or publishers. In the banking and finance field, they thrive. They seem to excel at anything related to science, research, and technology.