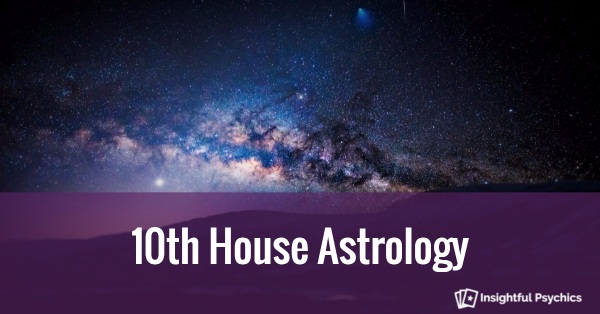 The sign of the tenth house is known as the Midheaven of your chart, or the highest point in the horoscope. This house identifies your public life, your profession, your status and reputation, as well as the influence you have upon others. In this area of your life, you can define who you will become as a mature adult.

The tenth house indicates your potential to achieve. It is the house of career, as opposed to the sixth house, which describes the kind of work you perform. The rewards you receive in your life, your achievements, and your ambitions are shown in the tenth house. Saturn, the planet of responsibility and discipline, is the natural ruler of this house. 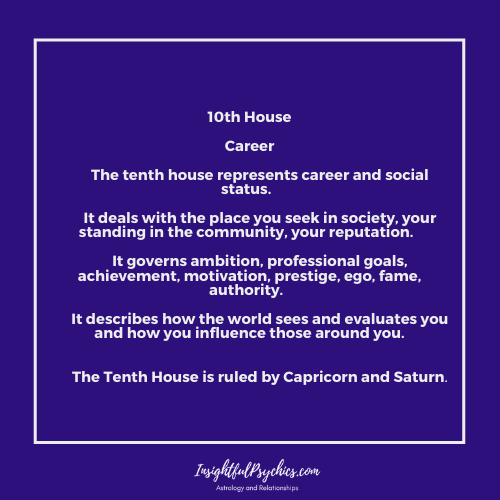 The Planets in the 10th House

The sun in the tenth house shows a powerful need for status, recognition and a sense of self-worth. Choice of career is very important for this individual, as happiness or otherwise at work will be a major life factor. Personal achievements are striven for, and this person is ambitious and determined, perhaps at the expense of all else.

This placing often indicates someone who has the potential for tremendous success in their chosen field. There is the ability to govern large groups, and these two things often combine in, say, politics for instance. These people make excellent bosses, having a great deal of rapport and understanding with those over whom they have authority. Often this person is widely loved. The need for change, variety and ambition is very strong, and the career is likely to be a focal point of the whole chart. An instinctive ability for handling change is a big asset to these people, and an impeccable sense of timing is often present too.

Here it is very likely that there will be many changes of career. If no career is followed, there will be such changes in life direction, especially with regard to aspirations and objectives. This placing is able to carry great responsibility and considerable seniority in a career. There should be as much variety as possible in the daily working routine, since boredom will otherwise hamper long term progress. Often this placing has a very authoritative ‘inner voice’ that can be more of a hindrance than a help.

This is an excellent placing for developing good relations with colleagues. If the subject holds a managerial or supervisory work post then he or she is likely to be a good, fair and well liked boss. Great pride in the profession is common, and the subject needs to be emotionally involved in the career in order to feel really fulfilled. Financial gain is important, but will not be the only motivation. Sometimes this placing is not so good for freelance workers, who can become lazy and undisciplined. Those who are not in a profession will have some idealistic ideas they can work out through a partner’s profession. The ability to identify with a partner’s aspirations and dreams and to provide practical and emotional support is also strong.

This placing makes the subject a force to be reckoned with in his professional life. The ability to work hard and to achieve objectives is extremely important, and the possibility of success is high. This person seems to have a constant sense of urgency, and would do well to slow down sometimes and take in some detail. A tendency to argue and to be quarrelsome is common, especially if Mars receives negative aspects from Uranus. A strong desire for worldly progress inspires this person into taking action each day and every day.

If Jupiter is conjunct the Midheaven, there will be a huge amount of enthusiasm and positive energy directed towards the career. In any case, Jupiter in this house exercises its dramatic flair in matters of work, and usually makes the individual shine within their own field. If in a position of power, this person is fair and kind, although pompous at times. They both seize and make their own opportunities, and do not allow any grass to grow under their feet.

Saturn is in its own house here, so its influence is very much strengthened. This individual may have to shoulder much responsibility as a result of circumstances – this will be well carried, however, and will not stand in the way of high ambitions and aspirations. This person has the ability to work persistently and with much determination in a career, and often gets to the top through guts and sheer hard work.

This influence is considerably increased if Uranus forms a conjunction with the Midheaven. In any case, the chosen profession is likely to be influenced by Uranus, with possible choices including airlines, the space industry, science, astronomy or astrology, the humanitarian and caring professions. Sudden changes of career direction are very possible, often throwing the baby out with the bathwater. An involvement in or fascination with politics is also associated with this placing.

This is an important placing of Neptune, and usually means that the subject has experienced many changes in life direction or career path. If Neptune is conjunct the Midheaven, the sign becomes important as this will be a definite influence on the subject’s career aspirations. At it’s best, this is a person with a colourful career and a great deal of spiritual satisfaction from their working and public life. At worst, however, this person lacks a sense of ambition or direction. Care should be taken not to just drift along in life, else satisfaction may be hard to come by.

This is an important placing for Pluto, especially if it is conjunct the Midheaven. This person needs to be very much emotionally involved in their career, and will undoubtedly seek power of one sort or another. There is much potential here, but it can so easily turn sour if emotions are not positively expressed.

what are your thoughts on this house?

With the tenth house, we move into the last quadrant of the horoscope. This is the least personal quadrant of the chart–relating to our careers and dealings with the public (10th); groups, associations, and societal issues (11th), and altered states of consciousness, dreams, and spirituality (12th).

The tenth house is the home of Capricorn, and like Capricorn, it is ruled by Saturn. It is the last “angular” house, and its element is earth. The primary keywords I use for the tenth house are “profession” and “career.” But I also think of it in terms of “dharma”–the real work we are here to do in this world, regardless of whether it involves monetary compensation. The sign located on the cusp of the tenth house, the planet ruling that sign, and any planets located in the tenth house, indicate the nature and quality of our careers, our interactions with the general public, and the kinds of activities that bring us into the public eye. It can also indicate how we view and react to authority figures in our lives.

I have Leo on the cusp of the tenth house, with Uranus, the Moon, and Pluto all residing therein–an interesting mix! Uranus is conjunct the MC within minutes and indicates that my career path is somewhat unusual and changeable. I periodically go through radical career changes. I started out working with children in the mental health field (my Moon in the tenth is almost exactly quincunx my Mars in Pisces (institutions) in the fifth house (children)). Then I went to law school and landed a good job with a large law firm (my MC/Uranus is trine Saturn in Sagittarius (law) in the second house (money)). Then I had my own practice for four years (the ruler of my tenth is my Sun, which is conjunct the ascendant in Scorpio and squares the MC/Uranus).

How about you? How does the tenth house reflect your career and/or dharma in this life?