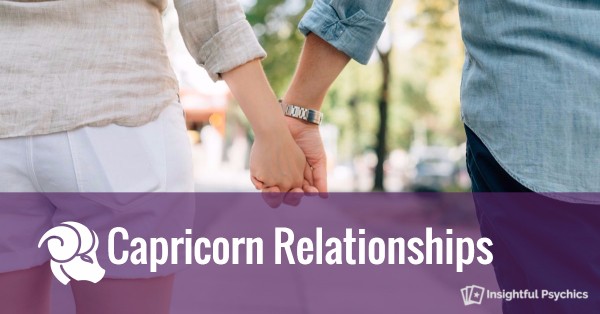 It can be hard to be close to a Capricorn, because they often close themselves off, but once someone does get past that barrier, the result will be a deep emotional connection.

Capricorns may often seem melancholy because they lack a sense of self-worth, and their ambition comes from a need for stability and a concern for prestige. Despite being loners, they need appreciation. They are self-contained and good at hiding their needs from others. This seeming indifference is the result of presenting many different faces to the world, sometimes to the extent that they lose sight of themselves in the process. This can lead to insecurities and a lack of self-worth in their relationships.

Capricorns see relationships as a serious business, and a Capricorn will not make a good partner for those seeking fin and spontaneity.
Capricorns have a strong sex drive, and this often lasts well into old age. When it comes to marriage a Capricorn is faithful and long-suffering. Like with many other things in life, a Capricorn will exercise great patience with his partner.

Go here for Sex with a Capricorn and Capricorn Compatibility

The Significance of relationships to you Capricorn

Relationships with Capricorns take a lot of effort. Despite how charming, accomplished, and stable you may appear to the outside world, deep inside you are a fragile soul who’s looking for someone who can be very supportive and loving.

It takes a very special kind of person to understand a Capricorn. If Capricorns find their perfect partner, they’re more likely to have long-lasting, fulfilling relationships.

Capricorn is ruled by Saturn, which gives them a more practical lifestyle. Before getting into a relationship, they usually think hard about it.  Before they commit, it’s almost like they check them out to make sure they’re everything they’re looking for.

Some signs are attracted to someone based on something else, whether it’s how they dress or look, what kind of sexual relationship they share with the person, or maybe their personality. Capricorns, on the other hand, like to think it over.

This means that sometimes you pick a partner that other people may be shocked or surprised by. In your eyes, though, you know this person will change your life.

Capricorn’s partnership could be seen as an ideal in many ways, something others would hope to achieve.  Relationships are like investments to you. Not as a financial investment, but as an investment of time and love.

There are times when Capricorns go a long time without a partner. They dream about what their partner would be like and wish for them, hoping that one day they will meet.

But when it comes to you, your instincts never let you down. Waiting lets you vet people and make sure you won’t make a mistake by getting into a relationship with them. What makes you do this? That’s because you want it to be done right the first time. Let’s be honest, you don’t want to deal with the hassle of dating over and over again.

The easiest way to explain all this is by looking at Cancer in your chart, which rules your relationship angle. The Cancer sign is very sensitive, and even though at first glance they seem fragile or delicate, they’re one of the strongest zodiac signs.  In other words, Capricorns are looking for a partner who’s both strong and sensitive.

Capricorn men aren’t the type of guys that have a dramatic love affair with a woman and make her fall in love with them. As opposed to this, he might take a step back and carefully examine his potential love interest before pursuing them. He is naturally drawn to pretty women who make him look good and who aren’t too independent or self-sufficient.

Capricorn men are known for their need to be in charge. The Capricorn may appear detached at first glance, but he is a control freak with a very limited tolerance for feminine energy. The Capricorn man can be emotionally naive, making it difficult for him to understand the importance of learning lessons about love. He mixes up the emotional realm and the material world by relating emotional well-being to financial success.

The greatest challenge for him is to value his feelings and emotions at the same level as the things he owns. In the end, the relationship depends on his willingness to express himself honestly. In taking into account both parties’ feelings towards each other, he gains a greater sense of awareness and self-knowledge.

Traditions are important to the Capricorn man. Before he even communicates his interest in a girl, he takes his time with her and ensures that they are a good match. Slowly court your Capricorn to catch his attention. A big smile aimed at him is the strongest signal you can send. He is likely to retreat if you are overly aggressive at first. To keep things in check once you’ve caught him, you need a set of firm rules.

Knowing his role makes it easier for him. It is very unlikely that he will want to change the roles in the future, so he must know you need them clearly defined. Don’t forget about the traditional stuff, too. Security, love, and happiness await you, but beware if you don’t enjoy cooking! He is most likely to want things done the way his mother did them.

Despite their desire to be loved, respected, and needed, Capricorn women want partners who are successful in their field. She will go the extra mile to satisfy her partner’s needs when she feels her feelings are shared. In some cases, she tends to confuse her inner and outer desires by focusing on the superficial parts of the material world.

Earth signs may end up being equally enamored with the big house and luxury vehicle as they are of the person they are with. Infatuations don’t last, but they teach her a lot about love and romance.

Her biggest challenge is loving herself. Rather than focusing on her shortcomings, she must develop a sense of self-worth. Because she is an extremely sensitive woman, she eventually learns from her mistakes and becomes a confident woman over time. She is at peace with herself once she realizes that money cannot compensate for insecurities deep in her heart. Then and only then will she be able to build a relationship built on intimacy, honesty, and commitment.

As long as you’re confident and secure in yourself, getting a Capricorn woman’s attention should be a breeze. When you radiate confidence and strength, she will be drawn to you. No matter what you do, don’t show her any weakness! Concerning dating, in particular. To her, it is important to have a partner who can keep pace with her.

Don’t waste your time on flowers and sentimental words. You should just tell her plainly and simply how she makes you feel.

What a Capricorn likes In a relationship

Ambitious companions
Material/Financial stableness
Trust in their relationship
Making long-term relationship plans
Commitment with no worrying of infidelity.
Perseverance to make things work
feeling safe in their life in all ways
Feeling safe with their partner

What a Capricorn Dislikes In a relationship

Someone being rude to them and disrespectful.
Someone trying to dominate them
A partner that is driven by their ego
Game playing and deceit
Extravaganza
Indecision
Being challenged by a partner
Being told what to do
A partner that is flighty and doesn’t know if they want to go or stay

Faithfulness in A Capricorn Relationship

One thing that should be made clear right off the bat is that the people of Capricorn are not usually unfaithful.

They usually give themselves wholeheartedly without asking for anything in return from their partner.

Even though that’s the case, regardless of the zodiac sign itself there is always the chance of infidelity happening. No one sign is 100% an angel.

Single but an accomplice?

Sometimes though they can find themselves in a position where they are the lover of another person, and a willing accomplice. This is usually a place where they don’t like to find themselves though. This would be a short-term fling, as they can’t stand to share a lover with somebody else.

Truth be told it is quite rare to find a Capricorn to be unfaithful.