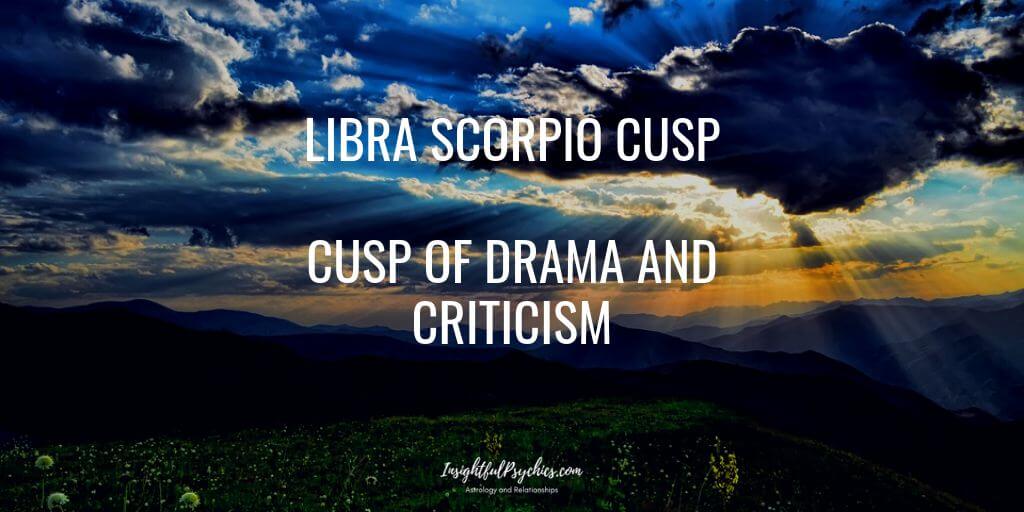 The Libra Scorpio cusp, which is also known by another name as the cusp of drama and criticism.

This is the point where on the Zodiac wheel the signs change from Libra to Scorpio. This happens between October 19th and 25th.

They can sometimes be quite the handful.

One of the Scorpio traits that they possess is that they can be very harsh or stern when it comes to expressing what’s on their mind.

They are missing the filter needed to say their piece without doing it in such a blunt way.

When it comes to the traits of the Libra they can come across as being very critical or judgmental of other people.

This is definitely a person that has a very strong power or energy behind them. Sometimes people have a hard time being able to deal with this type of personality.

At the same time, this genetic makeup helps them to stand out or shine.

They do seem to have a magnetic aura that people are drawn towards.

They can also be very critical and analytical to the point that when they are searching for the answers that they need, they will go to the deepest depth of every predicament that they’re in to get the explanations they demand.

Even though these people have a lot of power within them when they find a balance between the two signs they can manage to become very important and powerful influential leaders.

The Zodiac Cusps are where the 2 energies of the signs merge. What does the future hold for you fellow cusper? Ask an Astrologer today!

This is a person that will bring sophistication to anybody’s life.

They have fiery personalities and are very passionate.

When they’re upset about something they can sometimes be bitter or sour.

When they’re angered they can be undiplomatic, to the point that they are lacking tact.

What They Want in Relationships

They’re looking for somebody that’s very loving and caring.

Somebody that’s going to be very affectionate to them.

They also don’t want to just stay at home they want to go on some adventurous moments with their partner.

They want a person that’s outgoing and can be very resourceful.

How They Are in Relationships

When it comes to their relationships, they are very captivating and charming.

When they are very interested in someone, they put even more effort into grabbing their attention and enticing them.

These individuals have excellent communication skills that they put to good use.

Sharing feelings with their partner is obviously beneficial to a long-lasting relationship.

It is easy for them to establish and build friendships with others.

Because of the Scorpio trait of mistrust, it can take them a while to trust someone.

After giving their hearts to someone, they become deeply devoted to them.

Loyalty and dedication are mixed with a pinch of romance and passion for their partner.

That romantic attitude is what makes them such great partners. Who most often remain unrelenting in their efforts to charm their partner.

As with all cusp people, Libra/Scorpio is attracted to other cusp people with Taurus/Gemini (May 19-24) and Sagittarius (December 19-25) being most attractive.

What they really need to learn in life is how to express their kindness to others.

Show other people how helpful they can be, even if it’s a stranger.

They need to let themselves get out of that shell.

Even though they are very caring, they usually reserve that for the people that they trust and believe in.

Air and Water – Mixing the Elements

When you mix these two elements, it can sometimes create an imbalance or tension between logic and feelings.

If there’s one thing that can be said about the Scorpio side of them is that their emotions run deep and true. Their feelings are powerful.

Fighting and conflict in their lives can be so painful for them.

They will realize how powerful they are if they can see things from both a logical and an emotional perspective.

If they can control both, not much can stop them.

Personality:
They must learn to relax and have fun.
They possess a facile mind and sharp tongue.
They are the most critical people in the zodiac.
They must concentrate on the future and live for today.
They are sought out for honest opinions because they will hold nothing back.
Once they are committed to a project, they will refuse to stop until it is finished.
Just like all other cusp people, the Libra/Scorpio is of two elements-Air and water.
The theatrical side of libra, combined with the serious, deep feeling, and critical side of Scorpio.

They are known to be honest and upfront critics and they seldom hide their opinion.

They might seem cool but on provocation, they may find it hard to control their temper and might erupt.

Once they initiate any objective, they are known to keep on working persistently until the job is finished. And they are not swayed by the difficulties that come their way.

People belonging to the Scorpio Libra cusp often tend to be caught up, between logic and emotions.

They also need to control their cynical nature as it might lead them to be misunderstood by others.

Besides being innate critics, they are good at communication and enjoy social functions to the hilt.

They can also be seen as perfectionists and can easily feel offended or irritated when they see imperfection in any form.

Some of the positive traits of these people are ambition, loyalty, intensity, attractiveness, humor, etc.

They also have some negativity in their character that might include being cynical, lazy, obstinate, sly, manipulative, envious, and dictatorial.

They often get involved in an embarrassing predicament but they always come out clean and unharmed.

They love to be free and they despise others encroaching on their work or projects, irrespective of other’s intention to help. 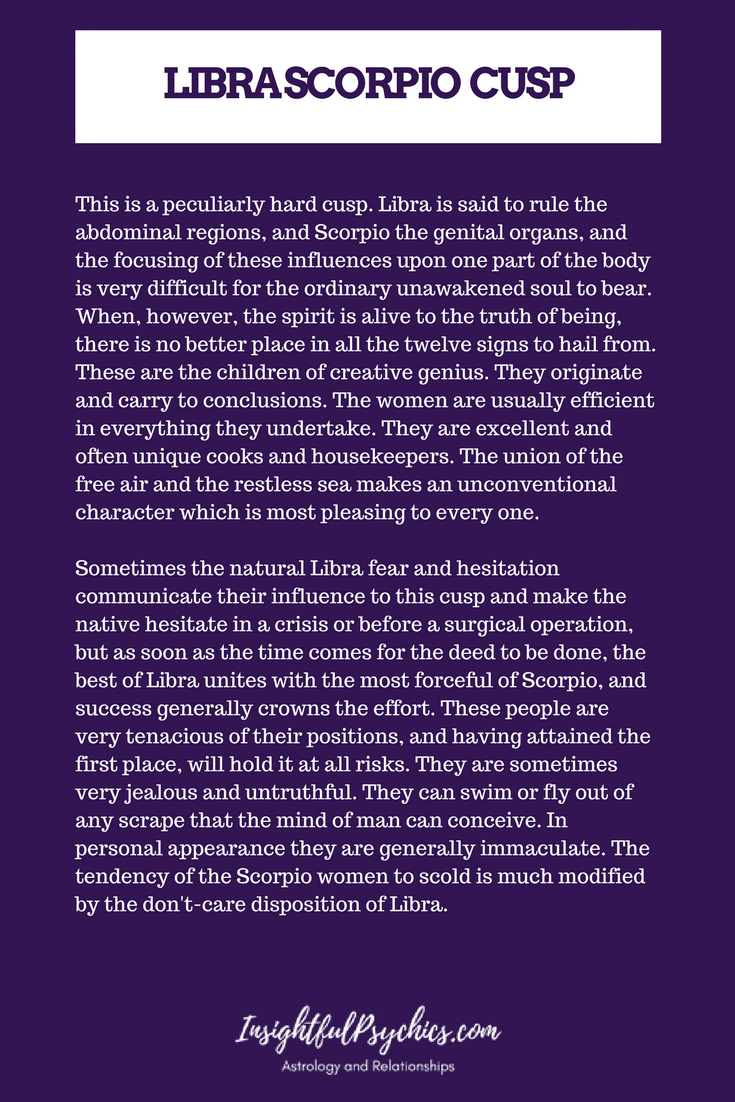 Other facts about this cusp: 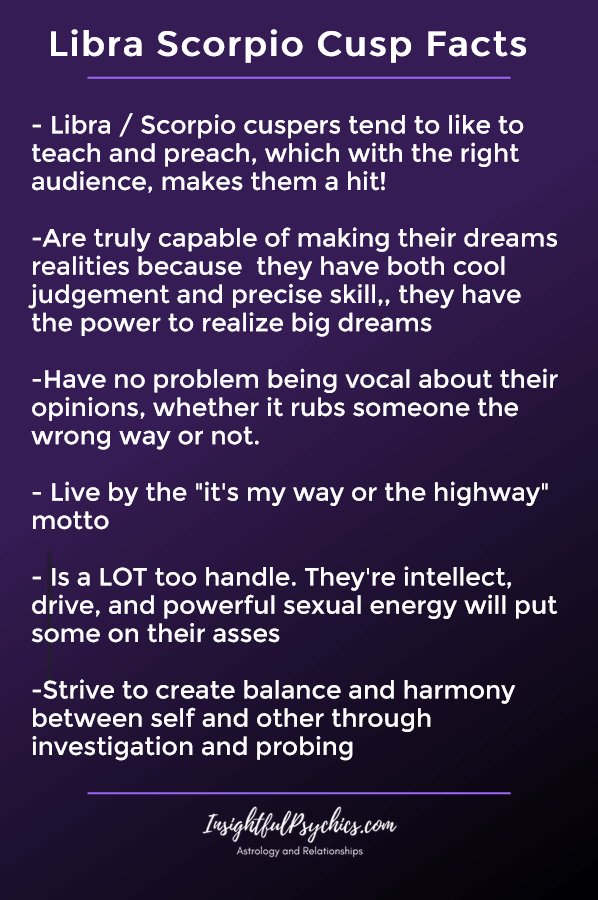 Melissa Martinez has 10+ years of experience helping people navigate life using astrology. I am busy writing her first book on love and astrology when not working on the website. read more about me https://www.insightfulpsychics.com/about/