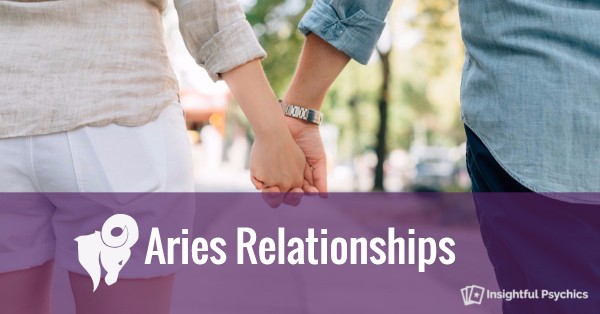 Aries people are charming and do well winning the opposite sex over. The downside is that they may appear intimidating and scare off potential love interests. As a masculine sign, Aries, no matter the gender, likes to be in charge. It is common for them to be competitive in love and relationships. They are also very passionate and adventurous when it comes to love, which can manifest itself in their desire to satisfy their burning sexual desires. This can make them appear emotionally insensitive or indifferent to their partner’s feelings. Despite this, they have a romantic side that can temper any sexual ego.

Go here for Sex with an Aries and Aries Compatibility

The significance of relationships to you Aries

Your passion for relationships is interesting since Aries is an individualistic sign. Mars is the planet of ego, which makes it seem that you’d rather live life your way.

It doesn’t mean you’re completely lost without a partner. You’re independent and like to do things your way. You’re not afraid to make big changes in your life when needed, and Aries energy shines brightest when you’re making them for the better. This is why you’re a leader and not a follower. Having the power to make your own decisions without having to listen to others is a powerful feeling. You can also use this if you’re dealing with other issues and can’t ask anyone for help. Even though these situations challenge you, it brings an inner strength out of you that is one of your best qualities. It’s this power that shows you’re an Aries.

Libra rules your relationship angle in your chart. It’s no secret that Libra is the sign for balance. For you to feel like you’re free, you need balance. Having trouble being independent puts you at risk of oppression. If you’re too independent, you’ll be cut off from the support you need to not feel overwhelmed. It’s possible to lead a happy life if you can strike the right balance between needing independence and being able to build up relationships based on trust. Trust yourself and you’ll be able to trust others. You can’t have a genuine relationship unless you’re on the same page as your partner.

Relationship-wise, Libra is one of the best combinations for you. You’re able to find balance with them for all the reasons mentioned above.

Aries men need to feed their egos when they’re younger or less mature. This is why they’re sometimes called womanizers. Usually, people don’t realize this fire sign has a pretty fragile ego and needs lots of attention.

The man eventually learns how to make better decisions in life only once he gets out of that immature phase and doesn’t need to feed his ego and need for instant gratification anymore. It gives him the ability to be open to having a deeper relationship with someone once he realizes life isn’t all about him and what he wants. When you have casual relationships there’s usually a price that you pay in the long term when it comes to your emotional health, you’re not able to build a deep bond with someone when you’re casual. Being responsible for his actions allows him to grow as a person and be sensitive to his partner’s needs.

When you want an Aries man’s attention, show him your strengths. he wants a confident woman, not one who is shy or insecure in front of him. Seeing as he’s a fire sign, he’s looking for someone passionate enough to match his energy, so show that Sassy side of you. He does have an impulsive nature, so if things get tough in his life, he might jump ship. So your job is to keep him interested in you and also show him why he should be committed to you.

This man has one major flaw, and that’s that he can be selfish sometimes. Some of the time he can get distracted by the Ambitions he has outlined for his life, and that can make him forget about his lady. What you need to do is get his attention back on yourself. You’ve got to show him you’re important. Long term, all this effort will be worth it. He’ll keep your life both spicy and exciting in and out of the bedroom.

She can become very frustrated in relationships, and sometimes if this happens, she might look for other people that could give her more than what she’s receiving. If you like this woman, you have to do everything that you can to keep her interested in you. She needs a hard-working guy, not one that’s so strong physically, but mentally. She’s looking for somebody that is very disciplined and can persevere through a lot. She needs to be with a partner that can please her. A person that can not only keep up with her in her daily life but also in the bedroom as well as she has a fiery sexual passion. If you can show her that you have a strong Inner Strength daily, she’ll stick with you no matter what. She doesn’t want to see weakness and if she does see it in front of her, it will only be a matter of time before she walks out the door without a second thought.

Aries women do have what would be considered one major flaw, and this is that they can be somewhat selfish at times. In life, she might become too consumed with her dreams and pursuits, which could cause her to neglect her significant other. Even worse though is that sometimes they can completely ignore or dismiss their mate’s feelings without even noticing that they’re doing that. The best way to get around this is to make a big impression on her. This is exactly what you need to do to achieve success with this very temperamental sign. Just understand that everything that you put into this relationship is going to be worth it in the end. This Aries woman is a fire sign, and she has a very powerful fiery personality that you want to have in your life. With her in your life, everything will always be exciting and fun for both of you. Oftentimes you’ll miss her when she’s not around, because you’ll see that boredom sets in when you’re away from her.

What an Aries likes In a relationship

Faithfulness.
Receiving gifts.
The romance and glamour.
To be active with each other.
To be number one.
Being seen.
A companion who loves life.
A mate who is stylish or a looker.
A very positive attitude

What an Aries Dislikes In a relationship

Criticism
Everything mundane.
Recklessness in a companion.
To be bored.
Display of self-doubt.
To lose.
The feeling of inadequacy.
feeling undervalued.
Being hounded.
To have to do things over again.

It’s important to note right off the bat that Aries isn’t known for their infidelity. It’s just not one of their traits that stands out.

These are people when they give their heart, they give it for life. They are known for their patience and are very loving people. So the majority of Aries relationships don’t end because of infidelity. They will usually end for some other reason. So in that sense, it’s pretty difficult to break up with an Aries over cheating.

If the Aries person does decide to be unfaithful, it’s usually because their relationship has hit such a low point that they feel like things are becoming hopeless. This doesn’t happen that often though.

The idea of infidelity might creep into their head as well if their partner has been unfaithful to them. Almost a thought of an eye for an eye. Revenge is a dish best served cold.

If they have been unfaithful to their partner, their partner usually won’t find out right off the bat. They tend to keep it to themselves until they want it to be known.

If they find out that you’ve been unfaithful, you’ll be able to tell by the way that they start acting towards you. Their change in Behavior will let you know that they’ve caught on to you.

If they’ve gone and done the dirty deed, they usually don’t hide it for long and they do the act without shame. Their view is that as soon as they can find somebody to do it with they will, they will carry out their revenge against you, explain that it happened, remove the issue from their lives and move on.

It should be noted that all Aries don’t react in this way. When they’re truly are in love with somebody they can have a long and stable relationship with them. They’re never out to hurt one person in particular, and they won’t destroy two lives to make their own life better.