A relationship that’s all about who holds power: the power struggle prevents many relationships between Aries from getting off the ground. Developing patience with one another is essential to a successful relationship. Relationships like this are most successful when the two people have a remarkable level of maturity and can resolve their problems civilly. Still, partnerships of this kind tend to be challenging most of the time.

Compatibility: High ( BUT depends on both peoples temperment and if they can work together)

Read on to learn how you can make things go smoother

Are Aries and Aries Compatible?

A couple that is both Aries and under the fire sign will find themselves in a competitive and very challenging relationship. In the relationship, they may compete against each other to determine who is better and who contributes more to it.

In an argument, both will consider that they are correct, and they usually will not bend to admit whether they’re wrong. So they can find themselves in disagreements that can be long and endless.

Their compatibility usually works well, but they need to work together to keep things alive and kicking ( which is very possible).

How Are Aries and Aries in Love?

When two fire signs join together, the love between them will usually be full of passion. In the bedroom, they will be a hot fire. They will become perfect lovers, and as they play in the sheets, they’ll figure out who can seduce the other better.

The only problem at this point is that they will both be very compatible on a sexual level. Still, even though that will stay the same, things could take an emotional dip.

That is where the problem lies between the two of them. They may be able to make it if they take their intense energy and all the fire between them and focus positively on cooperation.

They need to combine forces instead of working against each other. If they can work together as a team, they will find no problem that they can overcome.

This is a combination of two very passionate people; quick to love and quick to anger. They could have met and gotten married, and the divorce court before most people shared their first kiss.

It is a cardinal fire sign – direct, impulsive, and somewhat reckless – and acts with passion and enthusiasm if sometimes lacking persistence, patience, or endurance.

Read more about Aries in love

An Aries Man always seeks new experiences and is never afraid to dive headfirst into challenges. Instead, challenges come naturally to him because of his disposition and carefree attitude. It is similar to the mindset that an Aries woman shows. Even though both members of the couple share the same traits and views, conflicts can arise as they share some negative aspects too. They are both outspoken and tend to be aggressive, which can be irritating. For a relationship to flourish, both parties must be understanding and willing to make some compromises.

How to Be Successful in Your Relationship

it’s all about trust

One of the most important things about an Aries combination is that you both learn to trust each other wholeheartedly. Both of you need to be able to give each other enough independence to feel happy in life.

With freedom, neither partner will go out and do anything that will cause harm to the relationship. You both need your individuality as much as each other. One of the most important things you can give each other is to believe in each other and trust in each other.

One of the most important things this couple needs to succeed is to learn how to delegate responsibilities. Both of you want to be a leader in the relationship. This is where compromise truly comes in. For instance, you could take care of all the fun stuff needed, whereas he could handle all the financial details.

His ego will be satisfied by that. You can also take turns being the leader every day. Shared tasks and workloads will allow you both to be in control of a relationship without causing a power struggle.

Be gentle and tactful to each other!

Even though it’s well-known that you’re not used to dealing with other people sensitively or delicately, it’s exactly how you prefer to be treated. That can be the same thing that is said about your partner.

This doesn’t mean that you both need to handle each other with kid gloves. It just means taking the time to nurture and take care of the relationship you both share together. The compassion and affection you both have in your hearts can be focused on each other. 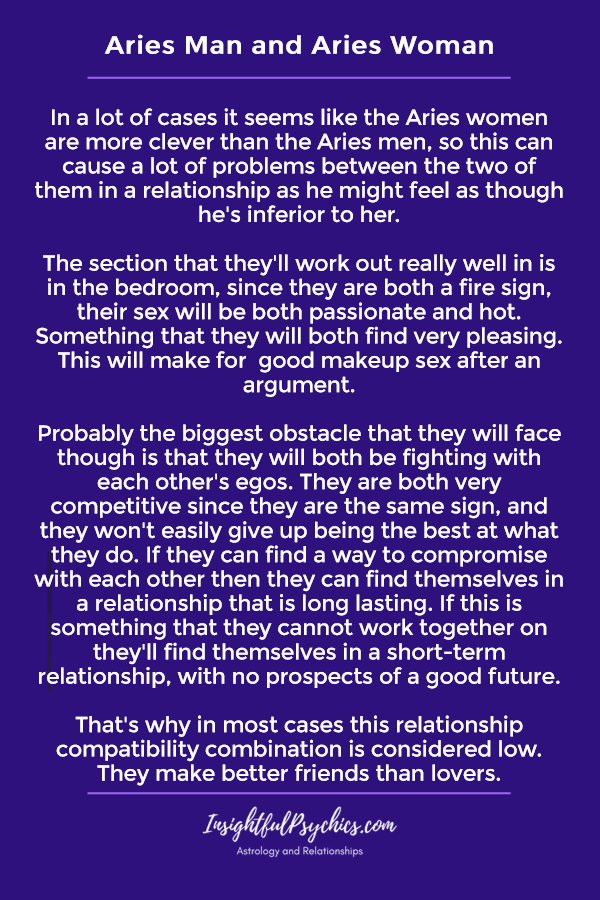 Regardless of their environment, they can often be found running around and tackling anything head-on. They love the chance to learn and grow and never shy away from an opportunity to try something new or even if it means facing a bit of chaos. Remember not to exhaust them by trying out all that you have first! Take some time to get to know one another and let your friendship grow before jumping headfirst into planning world domination at first sight. Don’t let this friendship burn out before it gets off the ground.

It sounds almost impossible to keep competition from rising to the surface every now and then between these two. In a relationship between intensely competitive individuals, trying not to compete with the one you love might be challenging. This becomes more exciting if you keep the competition to a minimum and instead learn to focus on each other. The romance is also fun, exciting, and never dull.

Aries and Aries In Bed

They have a solid sexual connection because they both know what they want and are very driven. Your relationships will be very passionate and expressive, ensuring the fires of passion will burn twice as bright! They will be highly cooperative and open with each other, so their relationship will go as far as both parties want it to. In romantic relationships, these people put a lot of effort into maintaining a close bond – that’s why they’re attracted to each other in the first place.

Read more about Aries in Bed

Jenn: You two should be able to get along very well. You share the same optimism and neither of you is afraid to take any risks. Your enthusiasm and pioneering spirits will bind you together and keep your relationship from ever becoming boring. Yes, it is a challenge to couple with someone as independent as you are, but it may be the grand, glorious challenge you’ve long-awaited.

Laura: These two people won’t have a humdrum relationship, as both have a natural attraction to adventure. These women love being chased and the male is all too willing to oblige. One will want to lead the way, as Mars rules both signs. That does not inevitably mean that the man will lead – many of these women have strong leadership skills too.

Tracy: This relationship can become a competition to see who can be in control. As both will probably be career-oriented they may give importance to their jobs. An advantage of this astrological union is that it will be dynamic and there will be no lies or suppression, yet there may not be much prudence, reason, or level-headedness either.

Heidi: Passion galore. Since both the male and the female can be somewhat domineering at times, each should engage in outside interests. This relationship can work if you’re both willing to compromise.

Keley: Not a good idea! Both people will want to be the ones in control. If there is true love and a desire to work things out, both partners will need to lighten up on each other.

Marcus: Two Rams…what picture does this bring to mind besides locking horns? Extremely compatible, but mutually explosive is a good way to describe these two horoscope signs. They inherently will trust each other. The Fire-Fire combination surely will burn bright, just keep the number of the Fire Department on the speed dial in case the house burns down.

David: Think of Mexican food – extra hot. This fast-paced, action-filled, competitive pairing can produce sparks – both the good kind and the bad. Excitement is guaranteed.

This has the makings of being a very strong relationship, as long as you and your lover take it in turns to control what is going on. This includes time spent in the bedroom, both are very sexual people and you both enjoy taking the lead and dominating each other, but this must be a shared role. You should find the two of you connect very well as you have similar physical interests and hobbies.

The only important thing you must ensure is that you keep each other’s confidence boosted, otherwise you will move away from each other on a mental level and become interested in others, who are willing to tell you how good you look! Two Arians normally make a very attractive couple, as their traits are always pleasing to the eye and you are bound to receive many admiring glances from passers-by when you are out together.

Melissa Martinez has 10+ years of experience helping people navigate life using astrology. I am busy writing her first book on love and astrology when not working on the website. read more about me Insightful Psychics - About Us